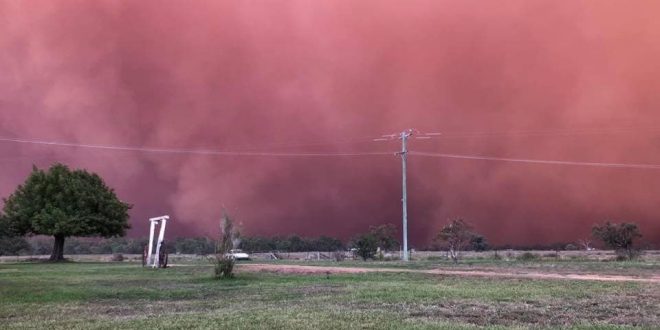 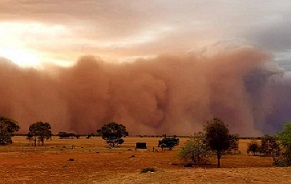 QUEENSLAND/ MELBOURNE: As bushfires continue to rage in nearly every corner of Australia, an entirely different sort of nightmare has afflicted the outback town of Mildura in the state of Victoria.

On Thursday, just as the sun was reaching its peak, hot, high and heavy winds in the north-west of the state of Victoria were doing the same.

Amid 40-degree heat (104 degrees Fahrenheit) and warnings of disastrous wildfires, a red “wall of dust” barrelled down on the rural city and swallowed it whole.

Soon enough, the sky began to glow orange, and the whirling dust and grit grew so thick, it settled like a fiery fog on the city’s residents, gathering in their eyes and mouths when they ventured out in the 40 kilometer/hour winds (24 mph). 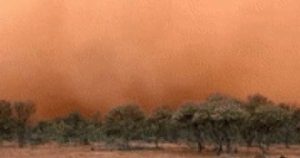 As winds began to shift, the Bureau of Meteorology in Victoria reported an 8 degree temperature drop in 30 minutes. Nevertheless, the storm remained so dense; visibility at the airport fell from 4 km to just less than 500 meters (540 yards).

A senior forecaster for the bureau, Tom Delamotte, told media that dust storms are not uncommon in Mildura, and given how hot and dry the region has been, this wasn’t entirely unexpected.

“Anytime that we have had windy conditions over the past month or two they have seen dust storms,” Delamotte says, “and given that today is very windy we are seeing quite a lot of dust picked up in the air.” 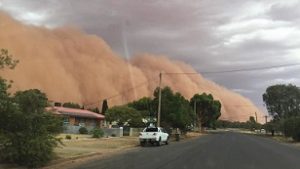 Even still, the frequency of these storms rings of a bigger issue. As climate change drives ever hotter and drier weather in the great south land, residents having to get used to recurrent storms just like this one.

“I have been here for 10 years and have never experienced anything like this,” Appleby says.

“We used to have a dust storm a year; this is now a weekly basis. At its worst I couldn’t see across the road. This time the heat, because it is 40 °C, coupled with the dust just made it unlivable. You couldn’t go outside.”