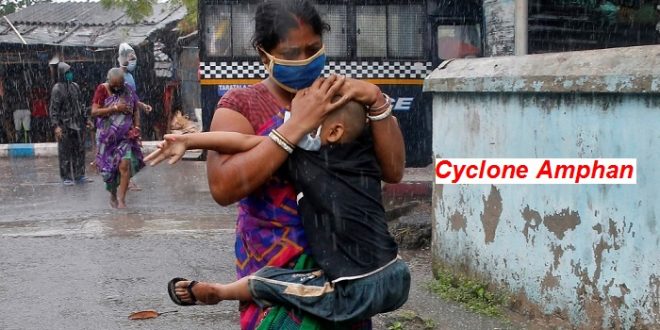 ‘Next 24 hours are crucial for India & Bangladesh’

DHAKA/ NEW DELHI/ ISLAMABAD: Cyclone Amphan, one of the most powerful in decades, has made landfall along the coastline of India and Bangladesh, killing at least five people and leaving a trail of devastation.

In Bangladesh, officials on Wednesday evening confirmed three deaths, including a five-year-old boy and a 75-year-old man, both hit by falling trees, and a cyclone emergency volunteer who drowned.

Two other fatalities were reported by the Indian media, including an infant crushed when the mud wall of the family’s hut collapsed in heavy rain in Odisha state, AFP news agency reported.

Bangladesh evacuated 2.4 million people to shelters. Another 650,000 people were moved to safety in the eastern Indian states of Odisha and West Bengal, authorities said, an operation carried out amid surging coronavirus infections.

The region, with 58 million people in the two bordering countries, has some of the most vulnerable communities in South Asia: poor fishing communities in the Sunderbans and over a million Rohingya refugees living in crowded camps in Cox’s Bazar in Bangladesh.

Houses “look like they have been run over by a bulldozer,” said Babul Mondal, 35, a villager on the edge of the Sunderbans, a vast mangrove forest area home to India’s biggest tiger population.

It was too early to estimate a toll on life or damage to property.

Mohapatra said the storm surge could rise to around five metres in the Sundarbans delta, home to around four million people and thick mangrove forests that are a critical tiger habitat.

“Our estimate is that some areas 10-15 kilometres from the coast could be inundated,” Mohapatra said.

“The next 24 hours are very crucial. This is a long haul,” said Mohapatra.

“We have got reports from some of our contacts in those areas saying water level is rising in the low delta areas. A lot of houses have been washed away,” he said.

“We will know the effect of the storm probably by tomorrow… Power lines are going to snap.” 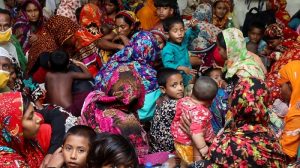 Amphan is the first “super cyclone” to form over the Bay of Bengal since 1999.

The Indian weather department forecast a storm surge of 10 to 16-foot (3-4 metre) waves – as high as a two-storey house – that could swamp mud dwellings along the coast, uproot communication towers and inundate roads and railway tracks.

There will be extensive damage to standing crops and plantations in the states of West Bengal and Odisha, the weather service said in a bulletin.

Authorities were hastily repurposing quarantine facilities for the looming cyclone soon after easing the world’s biggest lockdown against the coronavirus.

In neighbouring Bangladesh, officials said the cyclone could set off tidal waves and heavy rainfall, unleashing floods in areas close to refugee camps housing more than a million Rohingya in flimsy shelters.

The UN said food, tarpaulins and water purification tablets had been stockpiled, while authorities said the refugees would be moved to sturdier buildings if needed.

“We are fully prepared. But right now, there is no need to take them to cyclone shelters,” said Mahbub Alam Talukder, Bangladesh’s refugee commissioner.

Authorities in Bangladesh have also moved hundreds of Rohingya refugees living on a flood-prone island in the Bay of Bengal to storm shelters.

The first coronavirus cases were reported in the teeming Rohingya camps last week, and by Tuesday there were six confirmed infections.

According to a media report the cyclone is a “clear danger” for the refugees during the pandemic.

“If the storm actually hits, it’s only five kilometres from the coastal area of Cox’s Bazaar,” he said, referring to the district hosting the camps.

Bangladesh’s low-lying coast, home to 30 million people, and India’s east are regularly battered by cyclones that have claimed the lives of hundreds of thousands of people in recent decades.

The eastern Indian state of Odisha was hit by a super cyclone that left nearly 10,000 dead in 1999, eight years after a typhoon, tornadoes and flooding killed 139,000 in Bangladesh. In 1970, Cyclone Bhola killed half a million people.