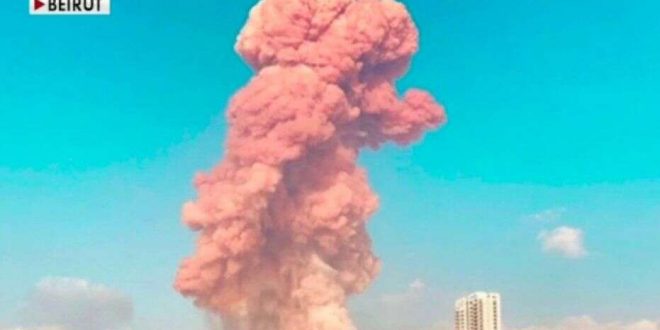 BEIRUT: Lebanese President Michel Aoun called for an emergency cabinet meeting on Wednesday and said a two-week state of emergency should be declared following a massive explosion in Beirut that killed at least 100 people and injured 4,000 others. 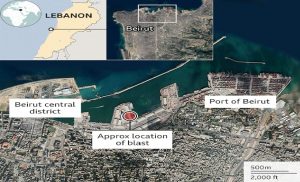 The explosion on Tuesday sent shockwaves across the city, causing widespread damage as far as the outskirts of the capital.

Officials said they expect the death toll to rise further as emergency workers dig through the rubble to search for survivors.

Beirut’s city governor Marwan Abboud said between 200,000 and 250,000 people had lost their homes and authorities are working on providing them with food, water and shelter.

The cause of the explosion was not immediately clear. Officials linked the blast to some 2,750 tones of confiscated ammonium nitrate that were being stored in a warehouse at the port for six years.

Prime Minister Hassan Diab called for a day of mourning on Wednesday.

Turkey’s Humanitarian Relief Foundation (IHH) is among those searching for survivors in Beirut, and Ankara has offered to build a field hospital and help as needed. 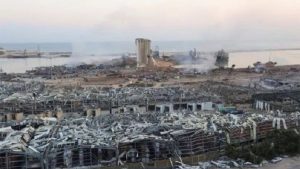 “We’ve relayed our offer to help…[and] we are expecting a response from the Lebanese side,” a senior Turkish official told Reuters.

Members of the IHH group were digging through debris to look for people and recover bodies, and the group mobilized a kitchen at a Palestinian refugee camp to deliver food to those in need, said Mustafa Ozbek, an Istanbul-based official from the group.

“We are providing assistance with one ambulance to transfer patients. We may provide help according to the needs of the hospital,” he said.

Pakistan’s prime minister on Wednesday expressed sorrow over loss of over 100 lives in a massive explosion that rocked Beirut.

“Deeply pained to hear of the massive explosions in Beirut with precious lives lost & thousand injured,” Khan said in a tweet. “We stand in solidarity with our Lebanese brethren in their difficult hour, sharing their sorrow & grief.”

Prime Minister Hassan Diab, in a short televised speech, has appealed to all countries and friends of Lebanon to extend help to the small nation. 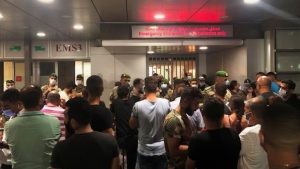 “We are witnessing a real catastrophe,” he said, before reiterating his pledge that those responsible for the massive explosion at Beirut’s port will pay the price.

Diab also said it was “unacceptable” that a shipment of approximately 2,750 tones of ammonium nitrate – believed by authorities to be the trigger of the explosion – was stored in a warehouse in Beirut’s port for six years without safety measures.

What is ammonium nitrate?

Ammonium nitrate, which Lebanese authorities have said caused the devastating Beirut blast, is an odorless crystalline substance commonly used as a fertilizer that has been the cause of numerous industrial explosions over the decades.

When combined with fuel oils, ammonium nitrate creates a potent explosive widely used in the construction industry, but also by armed groups such as the Taliban for improvised explosives.

Under normal storage conditions and without very high heat, it is difficult to ignite ammonium nitrate. That is because it is an oxidizer – it intensifies combustion and allows other substances to ignite more readily, but is not itself very combustible. 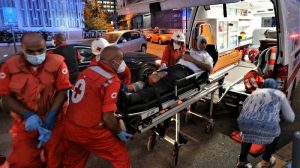 Tracing the explosives that tore apart the capital

It was only after a massive explosion ripped through Beirut that most people in Lebanon learned about the 2,750 tones of ammonium nitrate stored in a hangar at the city’s port.

However, analysis of public records and documents published online show senior Lebanese officials knew for more than six years that the ammonium nitrate was stored in Hangar 12 of Beirut’s port.

And they were well aware of the dangers it posed.

Iran’s president has offered to send medical aid to Lebanon and treat people injured in the massive blast that killed at least 100 people in Beirut.

“Iran announces its readiness to send medical aid to Lebanon and also offers treatment of the injured and other necessary medical assistance,” Hassan Rouhani said, according to state TV.

“We hope that the circumstances of this incident will be determined as soon as possible and that peace will return to Beirut.” 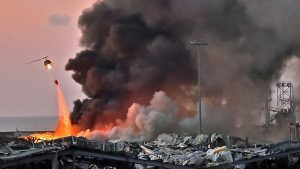 The United Kingdom has said it was too early to speculate on the cause of a massive blast that ripped through Beirut.

When asked about speculation about the causes of the blast, British junior education minister Nick Gibb said: “The Lebanese authorities are of course investigating the cause of that tragedy and before we have the results of that inquiry it is premature to speculate.”

Gibb also told Sky that Britain was discussing what technical and financial assistance could be offered to Lebanon.

George Kettaneh, the head of the Lebanese Red Cross, has said at least 100 people were killed and more than 4,000 wounded in the massive explosion in Beirut on Tuesday.

Kettaneh added the toll could rise further, and that the Red Cross was coordinating with the health ministry for morgues to take victims because hospitals were overwhelmed. 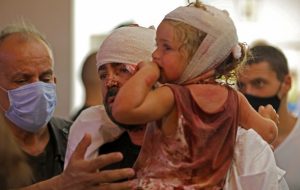 Australian Prime Minister Scott Morrison confirmed on Wednesday the death of one Australian after a massive blast ripped through the Lebanese capital, Beirut.

“Our hearts go out to all of those in Lebanon and in Beirut in particular at the moment,” he said, adding that the Australian embassy had been significantly impacted.

Officials said they expect the death toll to rise further as emergency workers dig through the rubble to search for survivors.

Cypriot Foreign Minister Nikos Christodoulides told state broadcaster CyBCthe Cypriot embassy in Beirut, which was closed at the time of the blast, was badly damaged.

Tuesday’s explosion was heard throughout Cyprus, which lies more than 200km (124 miles) away. 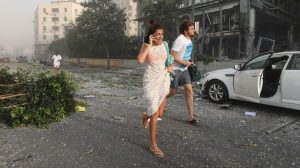 Indian Prime Minister Narendra Modi was “shocked and saddened” after learning of the large and deadly explosion that hit the Lebanese capital, Beirut, his office said on Wednesday.

“Our thoughts and prayers are with the bereaved families and the injured,” the prime minister’s office added.

It was unclear if there were Indian nationals affected by the blast that killed at least 78 people and injured about 4,000 others.

Dr Mirna Doumit, president of the Order of Nurses in Beirut, said three of the city’s hospitals had been destroyed.

“So we had to evacuate patients who were in those hospitals to others. In addition, we have two other hospitals that were partially destroyed. So it was a catastrophe and a big hit to the healthcare system, which was already bleeding,” she told Al Jazeera from the Lebanese capital.

“We lost three nurses working in the hospitals. I don’t find words to describe what happened. It’s like we are in a horror film.” 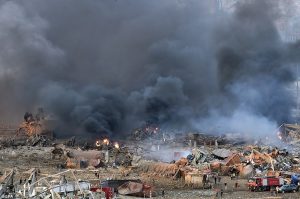 Nasser Yassin, professor at the American University of Beirut, told media he doubts the Lebanese government will be able to deal with this disaster on its own and called on the international community to provide food support, noting major grain silos had been destroyed in the blast.

“We’ve seen the Lebanese government not taking the right decisions when it comes to the economy, or finances or social issues. And I can imagine that this disaster, this catastrophe, will be dealt by the way Lebanese people do – relying on themselves and the support of their communities,” he said.

“For the coming days and months, we will be dealing with the immediate aftermath, and after that, we really need to look into new ways and new people to govern this country,” he said, adding: “We need more responsible leaders and we need the engagement of the international community to deal with this disaster.” 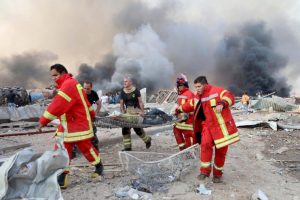 Malaysia offers to help ‘in any way we can’

Malaysian Foreign Minister Hishammuddin Hussein expressed his country’s grief over the Beirut blast, and offered to help in “any way we can”.

“Malaysia stands together in grief as our thoughts and prayers accompany the strong people of Lebanon,” he said in a Twitter post. “We stand ready to support any way we can.”

Two Filipinos among the dead

At least two Filipino nationals were among the dead in the massive explosion in Beirut, according to the Philippine Embassy in Lebanon.

The embassy statement also said six other Filipinos were injured in the blast.

More than 27,000 Filipinos are working in Lebanon, according to the latest figures of the Philippine Department of Foreign Affairs.

Badri Daher, the director of Lebanon’s customs office, said his agency was not responsible for the ammonium nitrate stores that triggered a massive explosion that left dozens dead.

Daher pointed the finger instead at Hassan Koraytem, head of the port.

Koraytem could not be reached for comment. The Port Directorate is under the authority of the Public Works and Transport Ministry.