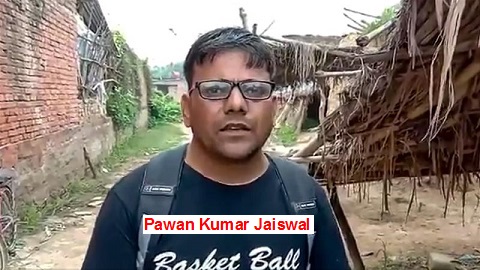 MELBOURNE/ NEW DELHI: An Indian journalist says he and his family are living in fear after police filed criminal cases against him for exposing corruption in a school midday meal scheme in Uttar Pradesh state.

Police have filed four criminal cases against Pawan Kumar Jaiswal for filing a video report that showed a school in Mirzapur district serves children only “roti” (or Indian bread) with salt.

As part of the state-run midday meal scheme run across government schools in India, children are supposed to be served cooked food to fight malnutrition – a major problem in the country. 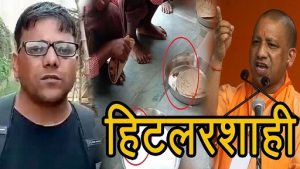 “The reality is that me and my family are living in fear. The district administration is behaving vindictively to save themselves and their role in the mismanagement of the midday meal scheme,” Jaiswal, who is a reporter with Jansandesh Times, a local newspaper, told Al Jazeera.

In the cases filed by the authorities, they accuse Jaiswal of defaming the state government headed by the Hindu nationalist Bharatiya Janata Party (BJP).

The local officials accused Jaiswal and his source Rajkumar Pal under various sections of the Indian Penal Code including sections 120 B (criminal conspiracy), 186 (voluntarily obstructing public servants in discharge of his functions), 193 (false evidence) and 420 (cheating) on August 31. 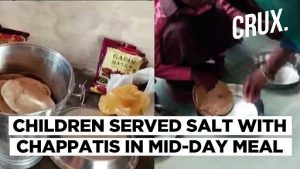 “When Jaiswal and his source Rajkumar Pal who tipped him off, got to know that vegetable was not available in the school, instead of ensuring that the kids were served with vegetables, they criminally conspired to falsely defame the state government and recorded a video of students eating only roti and salt,” says the police complaint, a copy of which is with Al Jazeera.

Jaiswal says he wanted to do his job by exposing the corruption in the midday meal scheme in the district. He said that the school had been serving kids rice, roti and salt for several weeks.

Despite finding Jaiswal’s report true, the state government is yet to withdraw the complaint against him which means that he could be arrested at any time.

“I went to the school on August 22 when I found [out] that the school was serving rotis and rice with salt on different days. Seeing the kids eat just roti with salt melted my heart. I just wanted to ensure the kids are served nutritious food in midday meal as mandated by the law. So I reported it,” Jaiswal told Al Jazeera telephonically from Mirzapur. 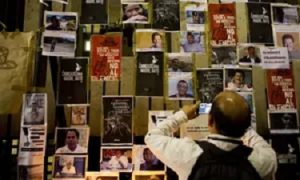 “All local journalists are extremely scared. We will certainly think 10 times before reporting,” said Jaiswal, concerned about his safety as police have already arrested his source in the village.

The district magistrate of Mirzapur, Anurag Patel, justified the police action against Jaiswal, saying that he should not have recorded a video because he is a print journalist.

Despite repeated attempts, Al Jazeera could not reach BJP leaders for a response.

Journalists in Uttar Pradesh – India’s most populous state – and in the capital New Delhi, however, have come to Jaiswal’s support.

Dozens of local reporters in Mirzapur organised a “pen-down” protest on Tuesday over the police action which has come barely two months after a Delhi-based freelance journalist was picked up from his home by the Uttar Pradesh police. 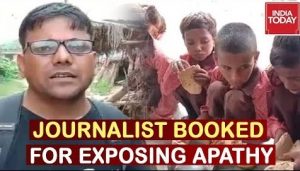 Prashant Kanojia was arrested in June for criticising Uttar Pradesh Chief Minister Yogi Adityanath – a hard line Hindu monk known for his anti-Muslim stance. Kanojia was released after the intervention of the Supreme Court.

Press freedom in India has deteriorated since Prime Minister Narendra Modi came to power in 2014.

Journalists in Indian-administered Kashmir, which has been placed under a crippling lockdown for a month, have complained of harassment by authorities.

Due to its crackdown on freedom of the press, India dropped down two places in the global press freedom index of Reporters sans Frontieres (RSF), a Paris-based independent media watchdog. India is ranked 140th out of 180 countries, placed below Myanmar and Afghanistan.

The Editors Guild of India, a prominent Indian body of editors, termed the move “a clear and classic case of shooting the messenger”. 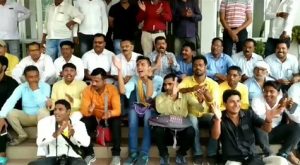 “It is precisely exposes like these that show how valuable free and fearless journalists are to a democratic society. It is shocking that instead of taking action to fix what is wrong on the ground, the government has filed criminal cases against the journalists,” said a statement issued by the guild on September 2.

The New York-based Committee to Protect Journalists (CPJ) and RSF have condemned the state action against Jaiswal.

The CPJ called on authorities to “immediately cease pursuing charges” against Jaiswal.

“Exposing wrongdoing is not defamatory, but rather part of a reporter’s job, and filing a case against him is a form of harassment and intimidation,” said Aliya Iftikhar, a senior Asia researcher with the CPJ.

Scared of further persecution by the government, Jaiswal has released several videos on social media pleading that he is innocent.

“I have done no wrong. I did what a reporter is supposed to do.”