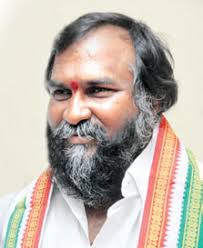 I urged Kuntia to continue Uttam as PCC president till 2019 elections: Jagga

Former Whip T Jagga Reddy said that he suggested Kuntia to attract settlers vote bank. He said that there was a need to identify a good leader from settlers and give good position to him. There was a need to conduct meetings in the state for every three months. He said that he urged Kuntia to continue present PCC president N Uttam Kumar Reddy in the position till 2019 elections. He suggested Kuntia to conduct a ‘Vidyarthi Garjana’ in December or in January with 5 lakh students in Hyderabad city under the leadership of AICC vice-president Rahul Gandhi. “I also suggested Kuntia to conduct a meeting on TRS government’s assurance on 12 percent reservations to minorities and tribal people. Rythu Garjana meeting to be conducted at Warangal”, he said.

TPCC working president Mallu Bhatti Vikramarka said that he informed Kuntia about his proposed padayatra and the party will take a decision on it. He said that he asked Kuntia to appoint all committees wings within three months. He opined that there was a need to the Congress to work for the sake of people who subjected to discrimination.