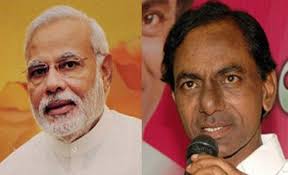 I didn’t belittle PM, have cordial relations with Modi: KCR

Hyderabad,  Chief Minister K Chandrasekhar Rao today refuted the allegations of the BJP leaders that he had made derogatory remarks against Prime Minister Narendra Modi during a recent public meeting.
“I did not make unsavory comments against Narendra Modi and might have made some remarks with reference to Andhra Pradesh and 70-year rule by the Congress and BJP, he clarified. “I do have better relations with Modi and Telangana BJP leaders should not cross their limits by making baseless charges”, he said.
Addressing the media after holding a TRS MPs parliamentary meeting at Pragathi Bhavan here today, the Chief Minister said the Centre has failed to give funds to the flagship programs in the State of Telangana. “We sought Rs 24,000 crore for these programs and projects and the Centre denied funds”, he said. He also took potshots at the comments made by Defence Minister Niramala Sitharaman and State BJP leadership, who sought an explanation from him on his remarks against Modi. “Actually Narendra Modi and I have cordial relations and the TRS Government will extend need-based support to the Center on some issues. I welcome if there was a chance for Telangana leaders to serve at the national level and will give ideas to the Modi government in future if he is alive for a few more years. The BJP leaders should not indulge in making false comments against my government”, he said. The Chief Minister held Parliamentary Party meeting at Pragati Bhavan here on Saturday.