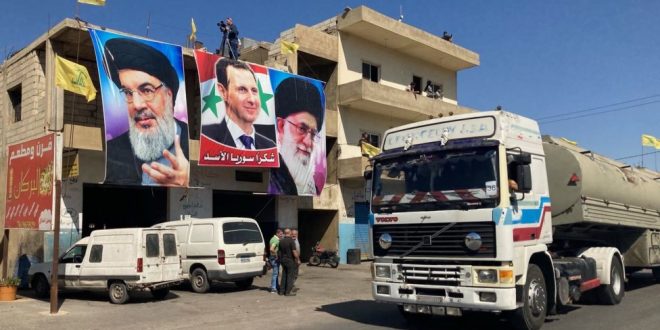 BEIRUT: Four convoys carrying Iranian fuel have arrived in Lebanon under an initiative by the militant group Hezbollah to ease the country’s crippling energy crisis.

Eighty Lorries with 4m litres (1.1m gallons) of diesel on board crossed the border from Syria, where a tanker is docked, Hezbollah’s Al-Manar TV said.

The fuel is being imported via Syria in an effort to avoid embroiling Lebanon in US sanctions on Iran. 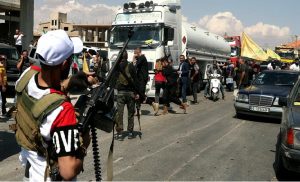 Hezbollah has said hospitals and other key services will get priority access.

An economic collapse has left Lebanon dangerously short of fuel as well as other basic necessities, such as medicine, electricity and even drinking water.

The first fuel lorries were met with celebratory gunfire and people throwing rice and rose petals into their path as they drove through the north-eastern village of al-Ain on Thursday morning.

A woman declared that the convoy had broken the “siege” of Lebanon by the US and its allies.

“Since this fuel is being brought by (Hezbollah’s leader) Sayyed Hassan then it will be delivered to the right place,” she told Reuters news agency.

Hezbollah’s leader said on Monday that it was “not looking to make a business out of this but wants to help ease the people’s hardships”.

The Iran-backed Shia Islamist group would distribute the fuel free of charge to government hospitals, nursing homes, orphanages and the Lebanese Red Cross, he added. The rest will be sold at “below cost” to bakeries, private hospitals and companies operating generators. 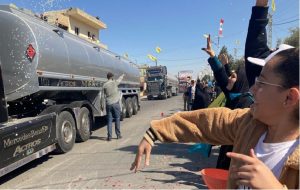 He also said a second tanker with diesel arrival would arrive at the Syrian port of Baniyas soon in the coming days, with two others carrying petrol and diesel following soon afterwards.

The BBC’s Anna Foster in al-Ain says Thursday’s fuel delivery is relatively small, given the country’s huge shortages, but it makes a political statement.

It has come from Iran, via Syria, transported by Hezbollah – all three are subject to US sanctions.

The international community now needs to decide how to respond in the face of Lebanon’s increasing desperation, our correspondent adds.

The new government of Prime Minister Najib Mikati, which was formed last week after 13 months of political deadlock, has said its permission was not sought, and the lorries entered Lebanon through an unofficial border crossing managed by Hezbollah.

Hezbollah’s opponents have said the fuel delivery is politically motivated and aimed at expanding the group’s already considerable influence in Lebanon.

The severe shortage of fuel in Lebanon stems from the country’s economic collapse, which the World Bank has said is one of the worst in modern times. 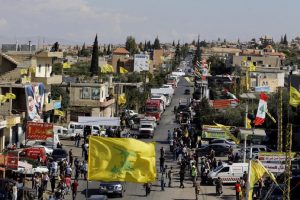 The Lebanese currency has lost more than 90% of its value against the US dollar since 2019, causing inflation to skyrocket, and pushing three quarters of the population into poverty.

As imports became more expensive, fuel began to disappear from the local market.

In recent months, power stations, hospitals, bakeries and other businesses have been forced to either scale back their operations or shut down completely due to the shortages.

Electricity outages can now last as long as 23 hours a day and drivers face queuing for hours to fill up their cars at petrol stations.

It is hoped that the establishment of the new government will make it possible to attract extensive support from the International Monetary Fund.

The finance ministry said on Monday that Lebanon would receive $1.135bn of IMF Special Drawing Rights, which can be changed into foreign currency. (BBC)