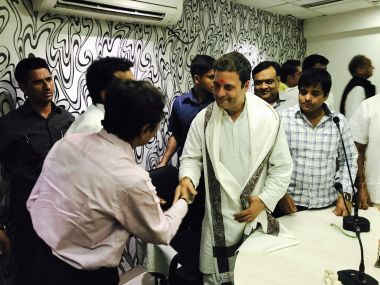 Gujarat election: Surat’s textile industry might vote Congress out of anger over GST, not fondness for Rahul Gandhi 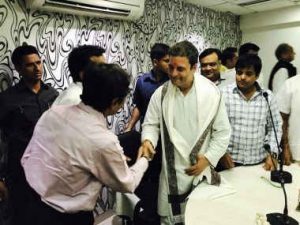 Surat mehnat se nahi darta hai (People of Surat don’t shirk hard work). These were the words of Nitin bhai, who owns a fabric shop along the Ring Road in the heart of central Surat. The district is a permanent home to countless packets of silk, synthetic, cotton, viscose, nylon in blue, white, green, red, black with paintings and glitters on them. The smell of cloth thickens the air as one enters a space where hundreds of buyers and sellers inhabit at once. Ask Nitin about the impact of the Goods & Services Tax (GST) on his industry and life and he says Surtiscan turn the tide of misery by rowing harder. But this time, they feel let down by the BJP-led NDA government at the Centre.
The workers here may be flawlessly skilled in various segments of textile production but haven’t finished middle-school. He gives the example of Surti artisans like Karan bhai lace wala and Vimal bhai embroidery wala from Varachha (North-East Surat); Raseeq bhai from Katargam (North Surat) who applies sequins and lace on clothes and Guddu bhai who is a handiwork artisan. None of them know how to fill out basic forms.
“A saree is made after a 17-part process and manufacturers, traders and artists are dependent on each other. Do these people have the time or the money to hire accountants, and can they operate computers and smart phones? The people of Gujarat understand the basics of business but they’re not economic experts. This strange and complicated tax is certainly pressuring us at the moment and will impact the percentage of votes,” says Nitin bhai who has been in the business of synthetic fabrics for the past 16 years. 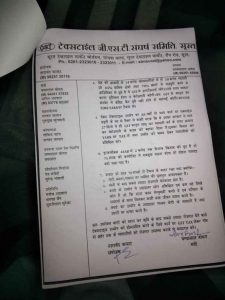 However, the Congress has not given a ticket to Tarachand. “We have written to the government several times. No one has addressed our queries regarding the hurried implementation. The government didn’t give us a demo or take the textile associations into confidence before bringing in the tax. Yarn should be exempted from taxation,” he said.
Yarn (from synthetic, artificial filament and manmade staple fibres) which was earlier under the 18 percent tax slab has been revised and reduced to 12 percent. The GST Council may have given relief to taxpayers by filing quarterly returns, provided their annual turnover is less than Rs 1.5 crore but in the textile sector, that figure is quite common.
As mentioned on the state government’s Vibrant Gujrat 2017 (8th edition of the biennial summit) brochures, Surat holds the record of the largest producer of man-made fiber and filament fabric with 40 percent share in the country and a daily production of 30 million metres of raw fabric. In Surat alone, the production touches 25 million metres. “The government is clearly aware of the potential of Surat and also of the capabilities and drawbacks of the people, then why has this communication lapse happened?” said a visibly-angry Tarachand. Even those who are joining hands with the Congress only speak about their frustration with the BJP and not in the positive alternatives they’re expecting from Rahul Gandhi.
Balwant Jain, another textile trader who sits in the same market at Udhna, had gone a step further and staged a shirtless anti-GST protest days shortly after it was levied. “We need to make entries again and again for the many multiple transactions we make in this largely informal sector. Imagine if I am a lace-worker and make Rs 200 per every Rs 1,000 order, then I can’t afford to keep a computer or hire a business consultant,” he said and added that Gandhi’s charkha spun the fabric of an independent nation but today, that charkha represents a mere ideology that the government might or might not agree with.
Move towards Sosyo Circle, southward from the Central Market and traders and manufacturers will tell you a slightly different story. A trader who runs the Standard Mill shares that he is a thorough bhajapa (BJP) supporter and that he is trading since many years in Gujarat for the simple reason that the state offers greater ease of doing business. “Here, the labour laws are simpler than in a state like West Bengal. But, in the last few months after GST was rolled out, the market is facing complications because of implementation flaws.” He shared the story of his goods being returned from the Uttar Pradesh borders just a few days ago because the buyers there failed to generate an E-way bill.

A copy of one of the several complaints by the Textile GST Sangarsh Samiti which was sent to the government. Image procured by Pallavi Rebbapragada.
The trader tried to explain to them that the E-way bill has been deferred till 31 March because there isn’t any system to initiate it.

The E-way bill is an electronic way bill for the movement of goods that can be generated on the GSTN, a common portal. A movement of goods of more than Rs 50,000 in value cannot be made by a registered person without an e-way bill. 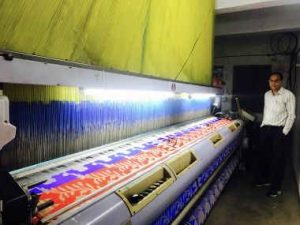 “The person I am sending the goods to, has to issue this bill. Sometimes, people want me to log into their system and generate this bill and sometimes they tell me that their accountants are on leave. It is a tough process that people have neither the time nor the money to understand,” added the Surat-based trader who feels that the Congress might now cash in on the industry’s current frustration of what is traditionally a BJP vote base.
Manufacturers say that subsidies for technical upgradation have reduced by 15% since 2015. Image procured by Pallavi Rebbapragada
There’s also a segment that outlines the positives of GST.
Harshit Jariwala, a third-generation fabric manufacturer, welcomes GST because it is slowly taking the textile industry towards a formal economy. “The E-Way bill will enable the government to keep a track on each cargo despatch on the country’s highways and increase accountability among traders and transporters. It was quite common earlier that a trader sending goods from Mumbai to Bhiwandi will show Surat or a destination in another state. The benefit of this is that the Central Sales Tax (central govt. tax) is two percent and Value Added Tax (state govt. tax) is 5 percent. Because of a lack of coordination between the central and state government, a lot of people were such cheating was quite common,” explains Harshit.

Congress vice-president Rahul Gandhi met traders and merchants from the textile industry during his recent road show in Surat. Image procured by Pallavi Rebbapragada.
He also adds that textile has been a kucchaeconomy. “Earlier, there was an 18 per cent duty on the yarn and we sold clothes tax free. This means that in the chain of traders-wholesaler-retailers, only the retailers paid five percent VAT. Now, everybody in the chain has to pay five percent.” He believes that the supporters for the Congress from within the textile market are only those looking to align with the party politically through movements or by contesting, and not the general public. 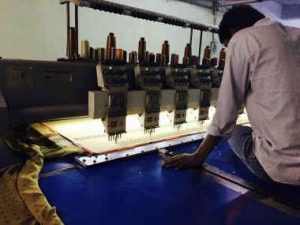 It must be understood that the GST came in at a point when the industry was already in transition. In the last two years, the seven to eight lakh power looms in Surat have started shutting down one by one. Manufacturers are investing in imported machines like the Jacquard that are made are Italy and cost up to Rs 80 lakh. The power looms are being junked at rates as low as Rs 18,000. “The industry is already grappling with a change and there is fear and anxiety among people about this change. High-value addition and decorative fabrics are becoming popular and in the last two years, over a lakh power looms have been smashed to pieces,” Harshit, who holds a mechanical engineering degree from NIT Surat, said.
His classmate at NIT Rohin Dumaswala, whose family owns 96 power looms, runs a large weaving and manufacturing unit in Katargam (North Surat), said, “There are more than 10,000 power looms in our area and the technical upgradation is haphazard. Earlier, the government used to offer better subsidised loans but these subsidies reduced by 15 per cent after 2015. GST has complicated the matters further because financing has become harder because people charge 18 percent GST. Any business, big or small, requires financing.” Rohin also shared that even though the GST is a good move in the long run, the government must read into the mind of the textile sector and even out other issues before they proliferate.
Surat nee kamaani, Surat maa samaani (What is earned in the lanes of Surat humbly remains in those lanes). This ethic towards work and wealth stems from their culture. Any economic disruption also threatens the way of life which the Surtis have adopted over the years. The resentment towards GST’s implementation is causing unrest but not so much as to jeopardise their 22-year-long bond with the BJP. The rest will be known on 9 December, the day Surat votes for the next government of Gujarat.