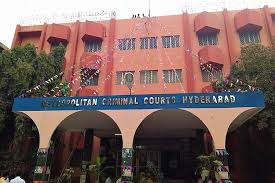 Hyderabad,  Election Tribunal chief judge Sumalatha has disqualified Kachiguda corporator Ekkala Chaithanya for declaring two instead of three children in the GHMC election affidavit.
On a complaint by BJP candidate Umarani, the Tribunal gave verdict after checking the birth certificates of the children. Consequently, the second runner Umarani in the election will be the new corporator. Meanwhile, Ekkala Chaithanya has said he would challenge the EC verdict in the High Court.