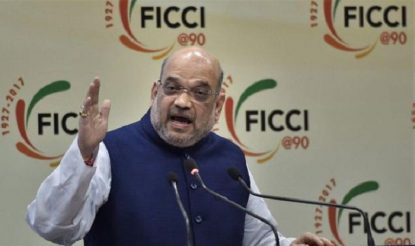 New Delhi, Sept 9: Discarding the role of demonetisation in slowing down the economy, Bharatiya Janata Party president Amit Shah said analysts are highly mistaken to attribute the note ban drive as one of the factors for the GDP rate slump. 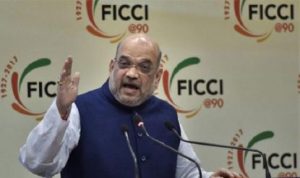 Demonetisation led to its formal expansion of economy, Shah said.
Tax net widened, he added.
Advises critics to assess development on the ground rather than interpreting statistics from a pessimistic view.
Shah, while addressing a FICCI meet here in the national capital, said the dip in GDP to 5.7 per cent in this quarter is due to “some technical reasons”.
Rather than hurting the economy, Shah claimed, demonetisation led to its formal expansion by bringing “crores within the mainstream”.
“The government took a tough decision. It wasn’t to reap political benefits. I certainly believe the formal economy of the nation has increased post demonetisation,” Shah said, referring to the increase in direct tax revenue due to the widening of the tax net.
As an advise to the critics of Modi government, the BJP chief said they should “tour all parts of the nation”, rather than propagating their opinion through a pessimistic study of the statistics.
According to Shah, the economical situation of the nation has improved manifold as compared to mid-2014, when the erstwhile government had handed over the reigns to the NDA.
“In the last three years, there has been decisive and focused approach to policy making,” Shah said, crediting Prime Minister Narendra Modi for breaking the state of “policy paralysis”.
Shah further added that the BJP-led regime’s zero tolerance towards corruption provided a fresh impetus to the economy, as hundreds of crores of the exchequer were saved by plunging the loopholes and eradicating corruption.
The Direct Benefit Transfer, Shah said, succeeded in ending subsidy leakages to the tune of Rs 57,000 crore.
Under the UPA, the GDP was 4.7 per cent, the current account deficit rose to 5 per cent and there was double-digit inflation while the government in its 10-year rule was riddled with scams and hit by policy paralysis, Shah added.
The BJP chief, however, said his government would not rely only upon statistics to prove the change in the nation’s financial health. “The change is visible on the ground, rather than excel sheets,” Shah said, claiming that seven crore people turned into job creators from job seekers under the MUDRA scheme of central government.
Another major achievement of Modi government, Shah highlighted, is providing LPG connections to scores of households in the rural parts of the nation.
The BJP president said Indian economy is headed towards a “bright future” with the roll-out of Goods and Services Tax. “Earlier, there were 17 different taxes, but now under the GST, there is ‘one country, one tax’ and one can avail full input tax credit,” Shah told the gathering.