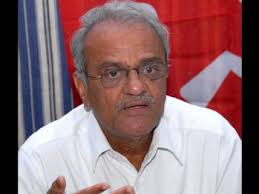 Hyderabad,  Communist Party of India (CPI) National Secretary Dr K Narayana has urged Prime Minister Narendra Modi to consider ‘Medaram Jatara’ an Adivasi festival in Telangana State as a ‘National Festival’.
In a letter addressed to Modi, a copy of which was marked to Telangana Chief Minister K Chandrasekhar Rao and released to media hereon Wednesday, Dr Narayana said Medaram Adivasi Jathara is biggest tribal festival all over the Asia which would take place once in two years. This festival is observed for four days. Nearly one-and-half crore people visit this place hailing from Chhattisgarh, Jharkhand, Odisha, Madhya Pradesh, Maharashtra, apart from Telangana and Andhra Pradesh States. Many are also visiting from abroad as well. Every two years the number of visitors are considerably increasing. Earlier Adivasis of this region used to visit, but now apart from koyas, Gonds and other tribal people were also visiting. This is the biggest festival after Kumbhamela, Shabarimalai, and Mecca, he claimed.
The Jathara is taking place since seven centuries. This is symbol of struggle for self respect and struggle for self rule of Adivasis. Sammakka, Saralamma both mother and daughter, who fought for freedom of Koya Adivasi community and for their self respect, became martyrs in the fight against army of Kakateeya king PratapaRudra. In memory of these heroines who laid down their lives the festival is being observed. This was the revolt by indigenous community against forceful collection of Tax from famine affected people, Narayana said.