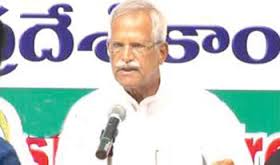 Hyderabad : A group of Congress leaders led by the Telangana Pradesh Congress Committee, Kisan Kheth Mazdoor wing Chairman M Kodanda Reddy today urged state government to cancel the proposed Pharma City at Muchcherla as it will destroy natural resources and habitat in Ranga Reddy district. Kodanda Reddy alleged that the Chief Minister K. Chandrasekhar Rao and his son Minister for IT and Industries, K Taraka Rama Rao has unanimously taken the decision for the proposed project.

Talking to reporters after submitting a memorandum to Chief Secretary SP Singh at Secretariat here, Kodanda Reddy expressed concern at the government plan for the pharma city. He stiffly opposed the project as it will destroy about 12000 acres of the farm lands, contaminate groundwater sources and pollute whether in the area and further devastate farm activity and render loss to people.

The Government should cancel the proposal in the larger interests of the people opposing it vehemently he demanded. The Government did not take approval from the Gram Panchayats and the local bodies and the project covers more than 12 Gram Panchayats and also semi urban areas. He objected that two local MLAs who shifted to TRS from TDP are silent at KCR’s behest. The local people will teach them a lesson if they remain mute spectators on pharma city project, he warned.

Post Views: 602
Share
Previous Exhibition of Handicrafts opens in Secunderabad
Next GHMC asks Lodha builders to furnish all details of construction by Aug. 29