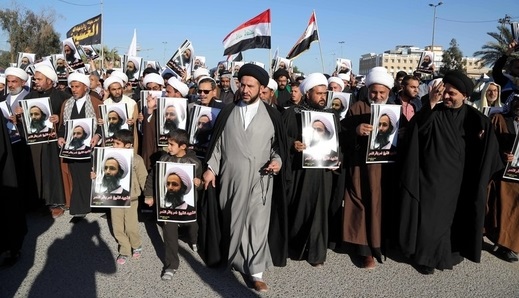 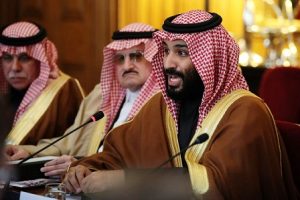 OTTAWA/ RIYADH/ MELBOURNE: Because of heavy pressure of millions of Canadians, inhuman role especially Shia genocide in Kingdom of Saudi Arabia (KSA) and neighboring countries under the direct supervision of Aal-e-Saud (KSA’s regimes), beheading of opponent religious leaders and prominent protesters including innocent children and women and these all details which have been highlighting during last six years and the data provided through Pakistani English daily namely Messenger and Indian leading News Agency known as PMI, at last, the Canadian government has also finally compelled to cancel the deal of arms with KSA in this connection a proper official announcement is also expected in near future like Germany, France and Italy; dozens of high-ups of Canada and KSA, concerned experts of the region, war analysts, Indian and Pakistani journalist and updated sources told PMI.

According to media reports nine months after first announcing probe into $11.3bn deal, campaigners question why Ottawa has not announced outcome.

Canada’s government is facing increasing pressure to announce the outcome of its review of a lucrative weapons contract with Saudi Arabia, more than nine months after first announcing the inquiry in the wake of journalist Jamal Khashoggi’s killing and the ongoing war in Yemen. 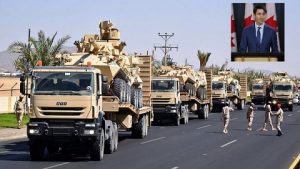 Prime Minister Justin Trudeau said in late October that his government was suspending approvals of new arms export permits for Saudi Arabia pending the indefinite review, but many Canadians are questioning why it has taken so long to reach a conclusion.

A group of civil society groups including Amnesty International this week penned an open letter to Trudeau, saying that in the lead-up to federal elections in October Canadians are demanding an answer over the review’s outcome.

“No update with respect to the progress of the review has been offered, bringing the sincerity of the effort into question,” the letter said. 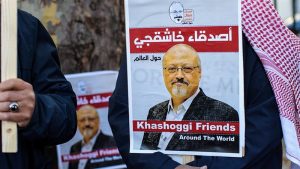 The letter came as academics and activists are also stepping up their efforts to pressure Ottawa to cancel the $11.3bn deal to export Canadian-made, light-armored vehicles (LAVs) to Saudi Arabia, with campaigners saying there is credible evidence Canadian arms are being used by the Saudi-UAE led coalition in the devastating war in Yemen.

Under Canada’s regulations, Canadian military equipment can be exported only when there is “no reasonable risk” that the weapons could be used against civilians.

The deal to export LAVs made by the Ontario-based General Dynamics Land Systems to Saudi Arabia was brokered in 2014 by the previous Conservative government under then-Prime Minister Stephen Harper. 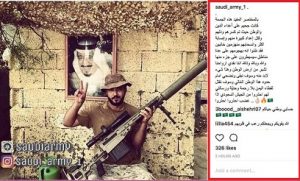 Trudeau had previously maintained that it would be “extremely difficult” to break the arms contract, saying the penalty could exceed $760m but in December, as pressure mounted over the October 2 murder of Khashoggi in the Saudi consulate in Istanbul, Trudeau changed his tone, saying in an interview for the first time that “Canada is looking for a way out of the Saudi arms deal.”

However, official figures show that LAVs worth more than one billion dollars have been exported from Port Saint John on Canada’s eastern coast to Saudi Arabia since Trudeau announced the review in October.

Over the past nine months, Canadian officials have repeatedly stressed that no new arms export permits have been issued but Anthony Fenton, a PhD candidate in political science at Toronto’s York University who studies Canada’s relations with Gulf Cooperation Council states, said this was a “moot point” since Saudi Arabia is not seeking to buy additional weapons from Canada following its decision to implement a freeze on new contracts with Canadian companies across the board – not just militarily. 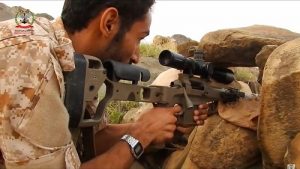 The move by Riyadh came on the back of a diplomatic dispute that erupted in August last year after Canada criticized Saudi Arabia over its crackdown on women activists.

Despite Trudeau’s remarks in December that Canada was looking for a way out of the deal, a top Saudi official confirmed in March that the already-agreed arms exports would continue as usual.

“Regarding the Canada arms deal, we see the Canadian government going ahead with the deal so the statements are for domestic consumption,” Adel al-Jubeir, minister of state for foreign affairs, told a news conference in Riyadh.

This week’s letter addressed to Trudeau reiterated concerns that the government may be dragging its feet on the matter until the exports of LAVs are almost over, noting that 127 LAVs were exported in 2018 alone, while media reports have indicated the full order is for 742 vehicles.

“In light of the rapid pace at which the LAVs are being exported, further delays to completing the above-mentioned review and your government’s ultimate decision will substantially undermine their meaningfulness,” the letter read. 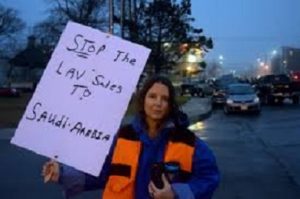 “We are deeply concerned that meaningful action will come too late that is, once the transfers are complete or nearly completed.”

Rights groups have long called Canada to cancel arms exports to Saudi Arabia, citing the kingdom’s poor human rights record and arguing that the weapons could be used in the war in Yemen, described by the United Nations as the world’s worst humanitarian crisis.

Nearly 100,000 people have been killed in Yemen since the Saudi-UAE-led military coalition intervened in support of the Yemeni government in March 2015, according to the Armed Conflict Location and Event Data project.

About 80 percent of Yemen’s population – 24 million people – is in need of humanitarian aid, while 15 million, over half of the population, is on the brink of starvation, according to the UN.

In July, the UN blacklisted the Saudi-UAE-led coalition for a third year over the killing and wounding of hundreds of children in Yemen. 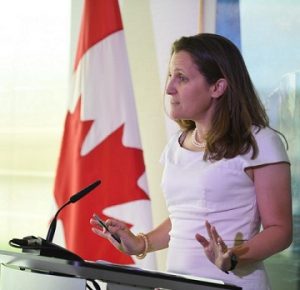 In recent years, videos and photographs showing Canadian rifles and combat vehicles being used in the war in Yemen has been posted online, with weapons experts confirming their authenticity. Canadian companies have also provided surveillance technology, aircraft, and pilot training.

In February, an investigation by journalist Mohamed Abo-Elgheit added to the mounting evidence, showing that Canadian PGW sniper rifles and LAVs were being diverted to Yemeni forces aligned with the Saudi-UAE coalition in 2018.

John Babcock, spokesman for the Canadian Ministry of Global Affairs, did not comment on the reports, but when asked what steps Ottawa has taken to ensure its arms do not end up being used in the war in Yemen, he said Canada passed legislation, Bill C-47, in December 2018 that requires the government to deny export permits “if there is a substantial risk that the export would result in a serious violation of human rights.” 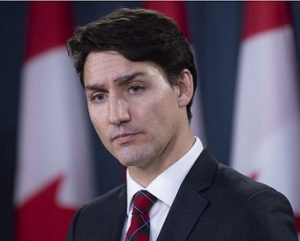 The Arms Trade Treaty prohibits the transfer of arms to another country if they will be used to commit genocide, crimes against humanity or war crimes.

“Effective treaty implementation is key and, if arms exports to Saudi Arabia continue after becoming a state party, Canada will find itself in non-compliance as soon as it joins the treaty,” Jaramillo told Al Jazeera.

“Every possible red flag concerning arms exports to Saudi Arabia has been raised yet, time and again, Canada seems willing to bend over backwards to give Saudi Arabia a pass. And it has done this while claiming to be a beacon for human rights, feminism and a rules-based international order,” he added. 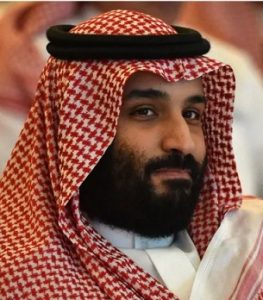 “If a country with Saudi Arabia’s appalling human rights record is eligible to receive Canadian weapons, who would not be?”

In 2016, when the Canadian Broadcasting Corporation reported on Canadian-made PGW sniper rifles that ended up in the hands of Yemen’s Houthi fighters, likely seized from forces backed by a Saudi-UAE-led coalition battling the rebels, the federal government announced an investigation but the results of the probe never came to light, raising concerns among campaigners now pressing for an update on the review announced in October.

“In May alone, they exported over $400m ($301m US dollars) worth of these LAVs. So, we don’t even know how many are left to export. It could just be a waiting game. And so they go, ‘We’ll suspend the deal once the majority of these have all been shipped,'” Fenton said. 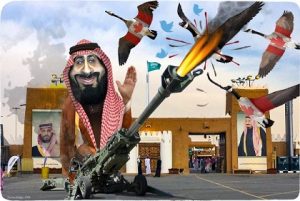 Meanwhile, Saudi cargo ships continue to stop about once a month in New Brunswick at Port Saint John, run by the UAE company DP World, a difficult port to keep a watch on, according to Fenton, as it is less visible to “prying eyes” than the previous port in Halifax where Saudi ships used to pick up LAVs until 2017.

Still, about two dozen protesters briefly delayed the arrival of the Saudi Bahri cargo ship at the port in December, with workers joining the picket line and refusing to load the LAVs but despite their efforts, the cargo ship waited out the protest and proceeded to load the LAVs early the next day.

An online petition created in June calling on the Canadian Labour Congress, a national trade union centre, to use its resources to cancel Canada’s arms exports to the kingdom has so far been signed by more than 900 Canadian academics, politicians and civil society groups. 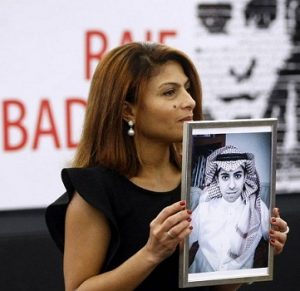 “It’s kind of depressing and an uphill battle [but the petition] is a good place to start to facilitate the ground-up type of movement that we desperately needed to see,” said Fenton, one of the people behind the campaign.

The petition underlined the achievements of unions in Denmark, Finland, Germany and Norway, who have successfully pressured their governments to suspend arms transfers to Saudi Arabia.

Fenton said the arms deal is a global issue, not a national one, as the supply chains for these weapons are “in many cases inextricably linked”.

“What we need to do is acknowledge that more explicitly and work together with activists in Europe and take the lead in Canada because I think we’re lagging behind.”