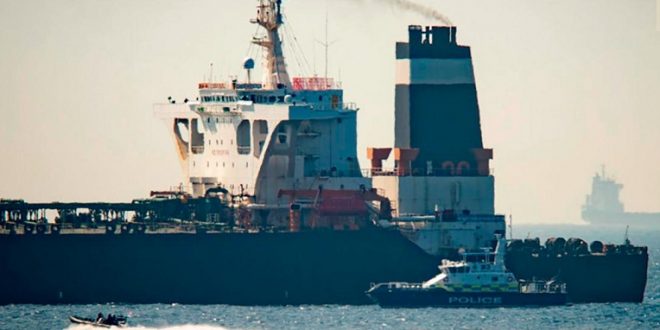 A view of the Grace 1 super tanker i near a Royal Marine patrol vessel in the British territory of Gibraltar, Thursday, July 4, 2019. Spain's acting foreign minister says a tanker stopped off Gibraltar and suspected of taking oil to Syria was intercepted by British authorities after a request from the United States. (AP Photo/Marcos Moreno) 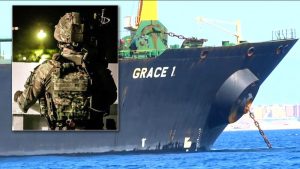 “We have reason to believe that the Grace 1 was carrying its shipment of crude oil to the Baniyas Refinery in Syria,” Picardo said. “That refinery is the property of an entity that is subject to European Union sanctions against Syria.”

The EU imposed a number of financial, trade and transport sanctions against Syrian President Bashar al-Assad’s regime in 2011 in response to “the continuing brutal campaign” against its own people 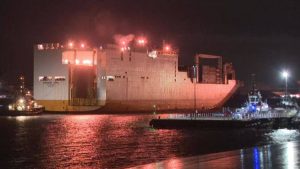 A spokesman for Iran’s Foreign Ministry, Abbas Mousavi, tweeted that the British ambassador to Tehran had been summoned over the “illegal” seizure of the oil tanker.

A senior Iranian Foreign Ministry official condemned the operation by the Royal Marines, calling it “piracy,” according to a report from the semi-official Tasnim news agency on Friday.

The official said the UK does not have the right to implement its or the EU’s unilateral sanctions against other nations “in an extraterritorial manner” and called for the vessel to be released immediately after it had been seized “at the behest of the US.”

Mousavi said Thursday that the “destructive” seizure of the oil tanker by the UK could increase tensions in the Persian Gulf, the state-run Press TV reported, citing a statement from Mousavi. 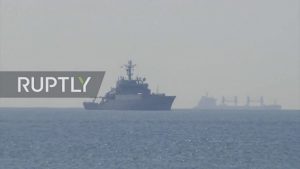 The incident comes at a time of heightened tensions between the US and Iran. Earlier this week, Iran announced it would stop complying with several parts of the 2015 nuclear deal that the Trump administration withdrew from last year.

The Syrian government has not yet responded to the incident.

Grace 1 is anchored off the coast of Gibraltar, a British overseas territory on the edge of southern Spain. 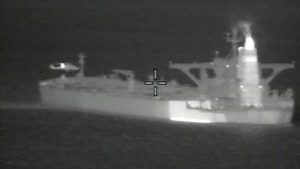 The UK’s Ministry of Defense (MOD) welcomed what it called “firm action by the Gibraltarian authorities, acting to enforce the EU Syria sanctions regime.”

On Thursday Picardo thanked “the brave men and women of the Royal Marines, the Royal Gibraltar Police, Her Majesty’s Customs Gibraltar and the Gibraltar Port Authority for detaining the vessel and its cargo.”

“Be assured that Gibraltar remains safe, secure and committed to the international, rules-based, legal order,” he added.

John Bolton, national security adviser to US President Donald Trump, also chimed in with a tweet. “America & our allies will continue to prevent regimes in Tehran & Damascus from profiting off this illicit trade,” he wrote. 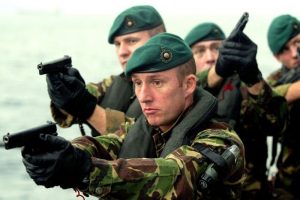 In mid-April, the Grace 1 loaded up with Iranian oil and turned off its tracking signals to avoid detection before sailing around the Cape of Good Hope in southern Africa to the Strait of Gibraltar, according to an article published in maritime publication Lloyds List earlier this week.

“Any tanker with Iranian crude follows a similar pattern of behavior: they do that by turning off their AIS transponder, turning it on and off in order to circumvent being tracked,” Michelle Wiese Bockmann, the author of the article, told CNN on Thursday.

“This vessel has spent most of its time in the Middle East Gulf, including protracted periods in Iranian waters at specific special mooring buoys,” Bockmann said. “They have deliberately taken measures to circumvent identifying the ship’s destination, location and cargo origin.” 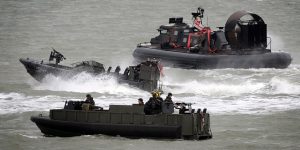 Samir Madani, co-founder of Tanker Trackers — which monitors vessels through satellite and maritime data — told CNN that the Grace 1’s journey around Africa took 2.5 months, a month longer than usual.

“The vessel sailed at a fairly slow speed as it was in no rush,” Madani said, adding that Tanker Trackers does not believe the vessel was carrying crude oil, but instead fuel oil from Iran’s Abadan Refinery.

“We can also see that she is heavily laden in the water. Her hull is 22.5 meters deep, meaning that she is carrying 2 million barrels of a very heavy liquid. Heavier than crude oil,” he said. “Not only that, but her previous assignments were transfers of fuel oil in Umm Qasr (Iraq) and Khor Fakkan (UAE).”

Madani said he did not believe Syria’s Baniyas Refinery was the ship’s destination as the waters would be too shallow for it to enter.

“Instead, we believe that the fuel oil was intended for ship-to-ship transfers to other vessels within Syria’s maritime borders,” Madani said.

According to several shipping trackers online, the Grace 1 was built in 1997 and is sailing under the flag of Panama. 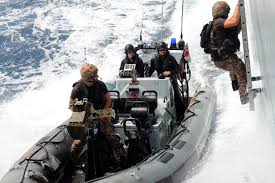 Iran has threatened to seize a British tanker after Royal Marines held one of their vessels suspected of taking oil to Syria.

Mohsen Rezai, a senior commander in Iran’s elite Revolutionary Guards, said on Twitter: “If Britain does not release the Iranian oil tanker, it is the (Iranian) authorities duty to seize a British oil tanker.”

It comes as the crew of the seized ship, Grace 1, are being interviewed by officials.

British Royal Marines seized oil tanker off the coast of Gibralter on Thursday for trying to take oil to Syria in violation of European Union sanctions.

A spokesman for the Gibraltar government said the 28-strong crew of the Iranian oil tanker are being interviewed as witnesses, not criminals.

The spokesman said the crew, who have remained on board the super tanker, were mainly Indians with some Pakistanis
and Ukrainians. 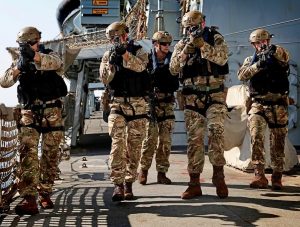 Police and customs officials remained on board the vessel to carry out their investigation but the Royal Marines have been stood down.

European Union sanctions against the government of Syria took effect in May 2011, shortly after the start of President Bashar al Assad’s bloody crackdown on pro-democracy demonstrators that has led to the country’s protracted civil war.

Iran, a close ally of Assad, is also under a US sanctions regime meant to bar all international sales of Iranian oil.

It was imposed after US President Donald Trump withdrew Washington from a nuclear deal with Tehran last year.