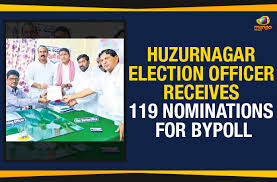 Suryapet, Oct.3 (PMI): After withdrawal of nominations on Thursday, a total of 28 candidates are in the fray in the Huzurnagar Assembly bye-election on October 21. The by-election will be a triangular contest among the TRS, Congress and the BJP.
The candidates left in the fray battlefield are S Saidi Reddy (TRS), N Padmavathi Uttam Kumar Reddy (Congress), Kota Rama Rao of (BJP) and Chava Kiranmayi (TDP). Besides, 14 independent candidates are in the fray.
It may be mentioned here that 76 candidates filed nomination papers with the Returning Officer for the by-election. Nominations of 45 candidates were rejected on various grounds. Of the remaining 31 candidates, three independents withdrew their papers on Thursday, leaving 28 in the battle of ballot on October 21.