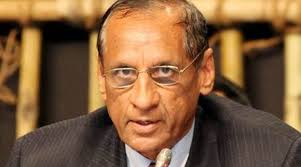 Hyderabad, Jan. 19 (PMI): Governor E S L Narasimhan today reaffirmed that his government would rededicate itself to accomplish Bangaru Telangana, with the triumphant electoral victory as the foundation, to usher in joy, happiness and prosperity in the lives of people of the State.

Delivering his address to the joint session of the legislature on Saturday, the Governor declared that the State government was giving top priority for welfare of the people. He said the State has achieved one of the highest growth rates in the country. “I take pride in pronouncing before the august House that during the first four years from 2014 to 2018, the State achieved 17.17% compound annual revenue growth rate and during the current 2018-19 financial year, the growth rate so far stands at 29.93%. Even in the GST collections, Telangana stands first among all the States in the country,” he said.

The Governor said the State government had recognized the immediate need to provide security of life to the vulnerable sections of people keeping in view the special circumstances prevailing in  Telangana State. He also censured previous governments in the State saying those governments gave a meager amount as pension to widows and old- aged people and added that the pension amount was substantially enhanced by the government of the day from Rs 1,000 to Rs 1,500 per month to enable them to meet their minimum needs.

State emerges No. 1 in country

The Governor said the popular welfare schemes like Kalyana Lakshmi and Shaadi Mubarak which provide Rs 1,00,116 financial assistance for the poor girls at the time of marriage has become a role model in the entire country. “The Telangana State has today come to be recognized as No 1 State in the country in the allocation of resources for the welfare of the people. The welfare schemes being implemented by the State government have created a sense of self-confidence and feeling of a secure life.

“With the benedictions of people, who were benefited by the welfare measures, the TRS government rode back to power for a second term, with a much higher majority in the House,” he said. Referring to Mission Bhagiratha Scheme, Narasimhan said it was a first of its kind in the country and was aimed to supply piped drinking water to each and every household. It aims to supply safe drinking water to all the 66 municipalities and 23,968 rural habitations of the  State. “As of now, 56 municipalities and all the rural habitations are getting were getting safe drinking water through Mission Bhagiratha.

The Governor said safe drinking water was being supplied through taps in 18,612 habitations and in the remaining municipalities and habitations, the works are on a fast-track. By the end of March this year, the works pertaining to Mission Bhagiratha will be completed in toto and every household will get safe and pure drinking water at their doorsteps through taps. “I wholeheartedly congratulate the State government and the Mission Bhagiratha team for the successful completion of this gigantic task,” he said.

All irrigation projects to be completed soon

Narasimhan also spoke about irrigation projects taken up by the state government. “With a view to providing irrigation water to one crore acres in the State, my government has taken up construction of major irrigation projects. All hurdles caused by vested interests by way of litigation or otherwise, have been successfully overcome by the Government. Forest and Environmental clearances as well as all statutory permissions from different Central authorities have been obtained for all the proposed irrigation projects. Recently clearances were given to the Sitarama Project, which would convert the whole of erstwhile Khammam District into fertile land.

The State government was making all-out efforts to obtain early clearances for Palamoor- Rangareddy Lift Irrigation Scheme also,” he noted. The Governor said the Central Water Commission, which visited the site of Kaleshwaram project,  complimented the efforts of my Government and added that the construction works on this project have been speeded up with a view to launch lifting activity through River Godavari during the coming monsoon season itself.

Steps on to make power-surplus State

Commenting on the status of the electricity sector in the State, the Governor said that in order to convert Telangana into a power surplus State and to bring 28,000 Megawatts of installed capacity of power, the State government was constructing new power plants. In a record time of 42 months, construction of the seventh stage KTPS of 800 Megawatts was completed and generation started there. “I am happy to say that the 1080 Megawatts Bhadradri Power Plant will also commence generation from this year to its full capacity.

“The 4000 MW Yadadri ultra Mega Thermal Power Plant construction is on fast track. To encourage power production through non-conventional energy sources, my Government has set a target of 5,000 Megawatts of solar power. As of now 3,613 megawatts of solar power has been produced. Telangana State stands second in solar power production in the country after Karnataka. Overall at the time of formation of State only 7,778 Megawatts of power was available, today it has increased to 16,503 Megawatts. I am happy to announce that Telangana established a record highest per capita power consumption in the country which is an indicator of development. Telangana is one and the only state in the country which supplies free quality power round the clock to agriculture sector. I congratulate the Government and the employees of power sector for achieving this great success,” he said. The Governor also spoke about all other welfare and development programs of the State government during his close to 40-minute address.

Earlier, chairman of the Telangana State Legislative Council V. Swamy Goud and Speaker of the Legislative Assembly Pocharam Srinivas Reddy received the Governor and escorted him to the chair in the House.  The session began with singing of the national anthem and was concluded by singing of the same. The House will meet again on Sunday to take up the motion of thanks on the Governor’s speech.  (PMI)