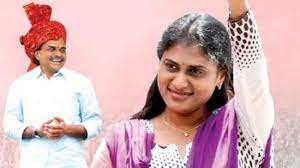 Khammam, June 19 (PMI): Founder president of YSRTP and daughter of former chief minister of Andhra Pradesh Y S Sharmila today announced that she would contest from Paleru Assembly constituency of Khammam district in the next Assembly elections scheduled to be held in 2023.

As part of her ongoing padayatra, Sharmila held a party meeting with activists and leaders on the outskirts of Nelakondapalli village of Khammam district on Sunday and announced that she would be in the fray from Paleru segment. She said Paleru will not only her birth place from now onwards but also her own village. She called upon the party workers and voters of the constituency to ensure her victory with a big majority. She said she should get the highest majority in the history of the State. She said her father had a great charisma in the district. She was the only legal heir of YSR in the State and added that she was the only successor of YSR’s legacy in Telangana.

“From now onwards, Paleru belongs to Sharmila. Many leaders emerged victorious by showing the photograph of former chief minister YS Rajasekhara Reddy. Khammam district is synonymous for YS Rajasekhara Reddy. Since the formation of Telangana State, many people requested me to contest from Paleru Assembly segment. It’s not my personal choice and it is a demand of people. Taking their plea into consideration, I have decided to contest from Paleru. So, the YSR welfare rule is going to start from Paleru in the days to come,” she added. (PMI)