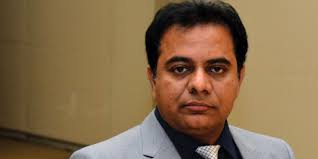 Hyderabad, Jan.23 (PMI): TRS Working President and former minister KT Rama Rao today slammed the newspapers of Andhra region for trying to reign in supremacy on Telangana and its issues. He asked the newspapers why they carry  Andhra news here,  when there is no news of Telangana in Amaravathi which should be reciprocal.

KTR felicitated Journalist Kranthi Kiran who was elected as  MLA, at a function held  by Telangana Union of  Working Journalists at Indira Priya Darshini Auditorium here. Speaking on the occasion, he expressed serious displeasure at the newspapers  carrying  Andhra news in Telangana. He warned that such suppression and supremacy tactics by some newspapers will not be allowed to   continue here after. Even after the formation of Telangana,  the news related the new state is not getting priority,  he expressed concern. ‘When I went to Delhi,  there was no news related to Telangana or its chief minister in newspapers. When I asked a person whether Telangana is not part of the country and its chief minister,  he replied that it was an Andhra edition. If there is no Telangana news in Andhra edition, then why Andhra news in Telangana and about Chief Minister K Chandrasekhar Rao, he retorted”. The newspapers at least now should keep in mind this thing before publishing  news s, he said. When we watch and hear Amaravathi news here,  why not Telangana news in Amaravathi,  he retorted.

He stressed the need for giving priority to Telangana newspapers and television channels and said  the government will support them.

Rama Rao also promised to take personal interest to resolve the issues of Journalists in Telangana. The Government has  set aside funds for journalists’ welfare, giving health cards and will provide house sites without legal tangle,  he said. He said he will talk to the chief minister to provide land for construction of a journalists building.

He flayed that Andhra Pradesh Chief Minister N Chandrababu Naidu was duping the  people and copied the schemes of Telangana and implementing them  in his state. He opined that Naidu cannot win the people’s mandate by adopting similar schemes of Telangana government. People and Journalists in AP are wise and knowledgeable,  he added.(PMI)