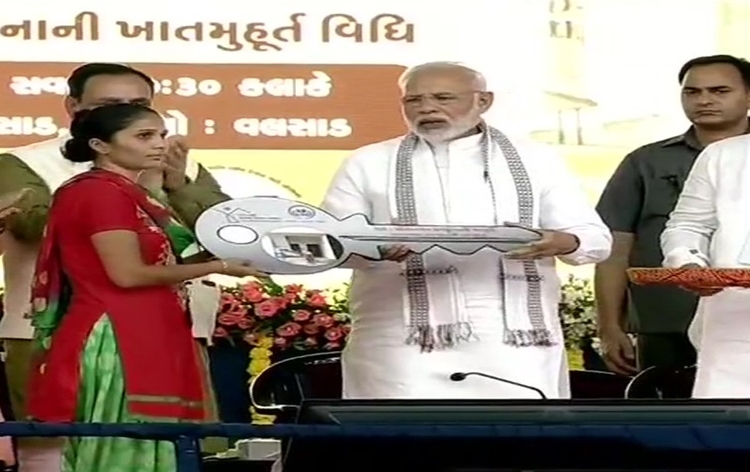 Wonderful homes under Prime Minister’s Awas Yojana has been made it possible because there are no middle men: PM Modi

admin August 23, 2018 National, Top News Comments Off on Wonderful homes under Prime Minister’s Awas Yojana has been made it possible because there are no middle men: PM Modi 638 Views 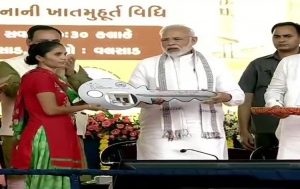 Prime Minister Narendra Modi said that wonderful homes under Prime Minister’s Awas Yojana has been made it possible because there are no middle men. He was speaking at a public meeting at Jujwa village in Valsad district in Gujarat.
Mr. Modi said he got an opportunity to talk to women across the state today who got their homes under scheme.
Mr. Modi said till now, we only heard about politicians getting their own homes. He said, now we are hearing about the poor getting their own homes The Prime Minister said , it is his dream to ensure that every Indian has his own house by 2022.
Earlier, the Prime Minister handed over the houses to the beneficiaries built under Pradhan Mantri Gramin Awaas Yojana schemes through vidio conferencing.
While handing over the houses to the women beneficiaries, Mr. Modi also interacted with them and congratulate for getting their dream home.
AIR correspondent reports that more than 1 lakh 15 thousand houses have been alloted to the beneficiaries of Pradhan Mantri Gramin Awaas Yojana.
This flagship scheme is aimed to achieve the the dream of “Housing for All”. Beneficiaries of 26 districts of Gujarat gets their dream home through collective e-Gruhpravesh today.
Prime Minister will also schedule to distribute certificates and employment letters to the beneficiaries under various development schemes, including Deen Dayal Upadhyay Grameen Kaushal Vikas Yojana, Mukhya Mantri Gramodaya Yojana and National Rural Livelihood Mission.
He will also distribute the appointment letters and mini- ATMs to women bank correspondents.Prime Minister Modi will also visit Junagadh in Saurashtra region where he will inaugurate several development projects including 300 bed newly built civil hospital, a milk plant and 13 other projects of Junagadh Municipal Corporation.
In the last lag of his visit, Prime Minister will deliver a convocation address at the Gujarat Forensic Sciences University in Gandhinagar. He will also attend the meeting of Somnath Trust in Gandhinagar before his departure for Delhi.
Post Views: 229
Share
Previous CS briefs scribes from African countries of monumental development in Telangana
Next Arun Jaitley takes charge of Minister of Finance and Corporate Affairs today