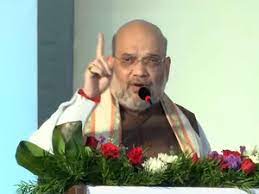 We will capture power in Telangana at any cost: Amit Shah

Hyderabad, July 3 (Press media of india): Union Home Minister Amit Shah today said they would capture power in Telangana State after the next Assembly elections at any cost and notwithstanding the problems created by any rival political leader.

Addressing public meeting held at Parade grounds here on Sunday evening, Amit Shah said the main plan of Chief Minister K Chandrashekar Rao was how to make his son minister K Tarakarama Rao as next Chief Minister. He asked the Chief Minister KCR whether he had visited the State secretariat at least once during his eight year long rule? He claimed that the CM was not visiting the secretariat after a sorcerer told him that his government would fall if he stepped into the secretariat and added that a leader like KCR, who believes in superstitions, should not continue in the post of the CM.

The Union Home Minister said Chief Minister KCR had also opposed the Hyderabad Liberation Day and added that the steering of TRS government was in the hands of MIM leader Asaduddin Owaisi. He also alleged that KCR did not think about the youth and the poor people in the State. He mocked that provision of employment to the youth in the eyes of KCR was to make his son KTR as the next CM of the State.

He claimed that Hyderabad princely State would not have become a part of the country had there was no Congress leader Sardar Patel. He said there was a need to end family based politics in Telangana. Shah also said they would get an opportunity to go to the secretariat after the next Assembly elections. He claimed that the Telangana State was going backwards while all other States in the country were going forward on the path of development.

He said the people in the State should give them an opportunity to rule them and added that they extended support to the formation of separate Telangana State at the time of its formation. He said they did not face any problem while forming three States in the country in the past. He asked the Chief Minister KCR to hold Assembly elections whenever he wanted and added that the BJP would win the elections hands down. He also claimed that the Telangana State was formed by UPA-2 government in 2014 after sensing that Narendra Modi would become the next Prime Minister of the country. (PMI)

Share
Previous Next 30 to 40 yrs will be era of BJP: Amit Shah
Next ‘Media crossing Laxman Rekha’: SC judge Pardiwala