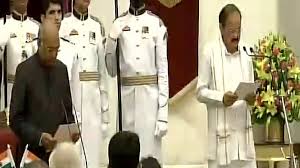 Venkaiah sworn in as VP; vows to uphold dignity of Upper House 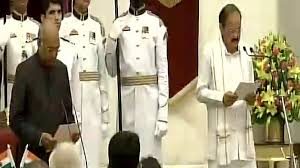 Prime Minister Narendra Modi and several ministers greeted him on the occasion. Addressing the Upper House later, Venkaiah Naidu said when he first entered the august House as a Member in 1998, he never had even a faintest idea that one day he he would be presiding over the House as Chairperson. He said he was humbled by the honour bestowed upon him by the Members of Parliament by electing him as Vice-President. Thanking the members for reposing faith in him, he assured that he would strive to live up to their expectations.

Venkaiah Naidu bemoaned that even after 70 years of Independence, “We are grappling with basic issues of poverty, illiteracy, inequality, agrarian and rural development challenges, abuse of power even as some countries similarly placed at the time of our attaining freedom, are marching ahead with a lot more focus and a sense of urgency, marshalling their energies in a much better manner. This august House meets less than 100 days per year. Should the Members not make the best use of this available time in furtherance of the cause of our country and the people? The choice is to be made by the enlightened Members”, he said.

“Effective functioning of the House is all about time and space management. Both the treasury and the opposition benches have defined space and time slots. We need to adjust ourselves within these set limits of time and space in the interest of better results.  All that is needed is an attitude of give and take on the part of both the sides. This is possible through strategizing for effective functioning of the House rather than for its disruption. This needs an enlightened approach on the part of all concerned’, he observed.

“I am also conscious that eminent persons like Dr Sarvepalli Radhakrishnan, Dr Zakir Hussain, Justice Hidayatullah, R. Venkataraman, Dr Shakar Dayal Sharma, K.R. Narayanan, Bhairon Singh Shekawat and others presided over the proceedings of this august House with distinction. My immediate predecessor Hamid Ansari did so for ten years. It shall be my endeavor to uphold the traditions and standards set by these worthy people”, he added. (PMI)