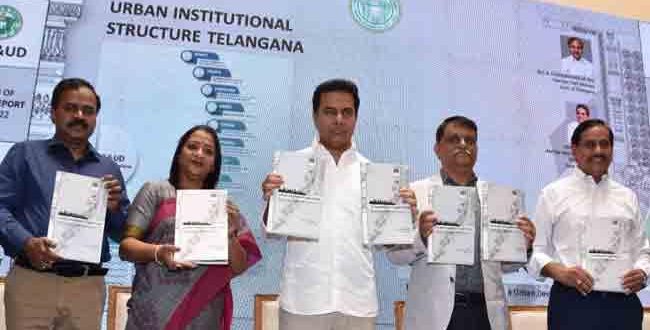 1.As per the Telangana Socio-Economic Outlook 2022, the share of Urban Population in Telangana is 46.8% against the national average of 31.16%. This puts us among the top three urbanized States in the country and compares favorably with urban population of Tamilnadu at 48.45%, Kerala at 47.23% and Maharashtra at 45.23%.
2. Cities are engines of economic growth and the ripple effect of economic activities in urban areas leads to multi-fold increase in employment and income levels.
3. Amitabh Kant, CEO NITI Aayog had recently mentioned that India is likely to have 50% of its population as urban by 2050. Telangana is much ahead of this trend as it is posed to have 50% of its population in urban areas by 2025 itself! And the accompanying advantages.
4. The State Governments progressive urban policies and initiatives has transformed the urban landscape in the State. After formation of State, the total number of ULBs increased from 69 to 142.
5. The total area under 142 ULBs constitutes less than 3% of States land mass. But they contribute close to two thirds of the State’s GDP.
6. The State Governments efforts in improving the quality of life and ease of
convenience to the Citizens is bearing fruits. Mercer has rated Hyderabad as the best city in India in the “Quality of Living Index” for 6 years consecutively.
7. Hyderabad continues to be number One, be in Purchasing Power Index, safety index, Health care index, Cost of living index, Property price to income ratio index, Traffic Commute time index, pollution index or the Climate index.
8. We are not competing with any other city in India- our aim is to put Hyderabad among the top 30 cities in the world so far as quality of life and economic competitiveness is concerned.
9. The real estate scenario in Hyderabad and Telangana:
• Hyderabad has been the best performing residential market in 2021
with growth in sales by 142% YoY to 24312 units
• Hyderabad is the only city among the 8 metros, as per the study done by Knight Frank, that has not had a single year of price decline since 2014
• Housing inventory overhang declined from 53 months in the first quarter of 2021 to 27 months in the same period in 2022- a massive 26 months decline.
• As per Anarock Report, Hyderabad remains the most affordable residential market among the top seven metros, with average rate of Rs 4450 per sft.
• So far as commercial space is concerned, Hyderabad has toppled Bengaluru as India’s top commercial real estate destination in terms of gross office space last year.

It is a matter of pride that the MA&UD Department has come up with its Annual Report 2021-22 for the fifth consecutive year, highlighting major achievements of the Department. The major highlights of the report are as under:
10.1 Infrastructure:
• Financial assistance of Rs. 2,062 Cr was provided to 142 ULBs under the Pattana Pragathi Programme which was aimed at improvement of sanitation and infrastructure in ULBs.
• The achievements are:
o Procurement of 2254 additional sanitation vehicles (Total 4882);
o Construction of Integrated Veg & Non-Veg Markets across all ULBs;
Works grounded in 103 of the 139 planned;
o Development of 734 new Vaikuntadhamams in 139 ULBs;
o Raising of 1518 in-house Nurseries in ULBs;
• Expenditure incurred towards the development of urban infrastructure under other programmes include:
-SRDP Rs.671.19 Cr
-CRMP Rs.293.93 Cr
-HRDCL Rs.114.97 Cr
-SNDP 37 works worth Rs.735.07 Cr in GHMC and 21 works worth Rs.231.08 Cr in surrounding ULBs are grounded.The LED Street Lighting of the entire ORR stretch, all intersections and important sections of service roads at a cost of Rs.100.22 Cr has been completed by HGCL.
• Owing to rapid development and keeping future requirements in mind, Service Road along ORR from Nanakramguda to TSPA and Narsingi to
Kollur is being widened to 4 lanes from the existing two-lane road. This is taken up by HGCL at a cost of Rs. 312 Cr. Along the same path, a 21-KM long bicycling track with Solar Panel rooftops is also being constructed making it a 42 km circuit.

10.2 Planning:
• TS-bPASS, since its launch on Nov 2020 has so far processed more than 1.15 Lakh applications indicating its efficacy, utility and ease of convenience.
• In FY 2021-22, 87,666 applications were processed through TS-bPASS and 138 million sft has been added in Telangana.
• In FY2021-22, GHMC issued TDR certificates worth Rs. 3,500 Cr which has resulted in saving of cost besides speedy acquisition of properties for major projects.
• Efforts are on to prepare / update Master Plans for all ULBs in the State, including the newly upgraded GPs as ULBs.

10.3. Sanitation:• The capacity of the existing 19.8 MW Waste to Energy plant at Jawarharnagar is being enhanced to 48 MW and necessary permissions have been accorded. Apart from this, a new 14.5 MW WTE plant at Dundigal is being set up and will be functional this year.
• A Second C&D waste recycling plant of 500 TPD capacity has been opened in Fathullaguda. With this, Hyderabad now has two 500 TPD C&D recycling plants, the other one at Jeedimetla.
• Biomining for processing of legacy waste and fresh waste has been initiated in 123 ULBs
10.4 Water Supply and Sewerage:
• The HMWSSB has initiated construction of 31 STPsto increase the sewage treatment capacity in Hyderabad from the existing 772 MLD to 2029 MLD and ensure 100% treatment of waste. In phase-I, work on 14 STPs have
been started having a combined capacity of 883 MLD.
• To solve the raw water drawl difficulty issue for Krishna Drinking Water Supply system during summers, HMWSSB has taken up the Sunkishala project at a cost of Rs.1450Crs.
• Rehabilitation and strengthening of 129.32 KM sewerage network in Old City has been initiated.10.5 Greenery:
• Innovative practices and modern plantation methods as part of ‘Telangana ku Haritha Haram has resulted in significant improvement in the green cover in urban areas. A total of 6.34 Cr saplings have been planted across the state in FY 2021-22.
• Hyderabad has topped the Mega Cities in the country with 48.66 Sq.Kms of green cover in a decade as per the Forest Survey of India 2021.
• More than 10 Cr saplings raised in 1644 Nurseries across Telangana for plantations under the Telangana Ku Haritha Haram Programme for the year 2022-23. HMDA has developed 16 Urban Forest Blocks covering an area of 5978.99 Ha, which act as urban lung spaces for the citizens.
• A total of Rs. 668.52 Cr earmarked under 10% Green Budget to GHMC and other ULBs.
10.6 Municipal Financing:
• GHMC has been able to obtain loans worth Rs.5983 Cr to take up capital intensive works. Out of this around 2000 Cr are obtained without state Guarantee where banks have done due diligence after checking GHMC account balance. Coupled with its own resources, the GHMC is undertaking capital works worth Rs. 8965 Cr.
• On account of significant improvement in civic infrastructure in ULBs through TUFIDC funds as well as demand for executing more works in constituencies, Government has accorded permission to TUFIDC to obtain an additional bank loan of Rs. 2000 Cr, thereby taking the Government Guarantee amounts to Rs. 4000 Cr.
• The Greater Warangal Municipal Corporation has raised a term loan of Rs. 90 Cr for a period of 5 years through HDFC Bank with a focus on services and infrastructure like roads, drains, vaikunthadhamams, etc.
• After successfully constructing 22 critical Missing link roads in Hyderabad,HRDCL plans to raise Rs. 2410 Cr to take up another 104 roads identified in GHMC and adjoining 10 ULBs.
10.7 Heritage and Culture:
• On heritage front, there were special efforts this year on restoration of defunct step-wells. The restored Step-wells include:
o Three-tiered stepwell at Bapu Ghat
o Bansilalpet Stepwell in Secunderabad. The Hon’ble PM of India acknowledged the efforts of the State Govt. for this project.
• Other heritage works include completion of Moula Ali Kamaan work ;
• Char-Kamaan restoration work is taken up and out of the 4, Kali Kamaan
restoration has been completed.
• The ‘Sunday-Funday’ event on Tank Bund and ‘Ek Shaam Charminar ke naam’ at Charminar planned with festive fervour and special performances was a huge hit among the public with more than 15,000 people footfalls at each event every Sunday.
•Telangana won 12 awards at the Swacch Survekshan Awards 2021 by Govt of India which is a testament to the continued efforts put in by MA&UD in the field of Sanitation.
• For the second time in a row, Hyderabad has been awarded the ‘Tree City of the World’ tag by Arbor Day Foundation and United Nations.
• All the top 10 cities in the country to ensure 100% PMSVANidhi amount disbursement are from Telangana.
• Telangana ranks 2nd in the country in Safaimitra Suraksha Challenge of the Govt. of India.
• 2 BHK housing scheme was selected as a finalist in the ‘Smart City Expo World Congress’ under Living and Inclusion Award Category. 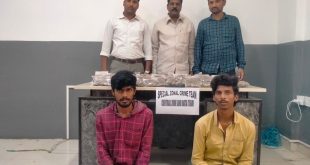