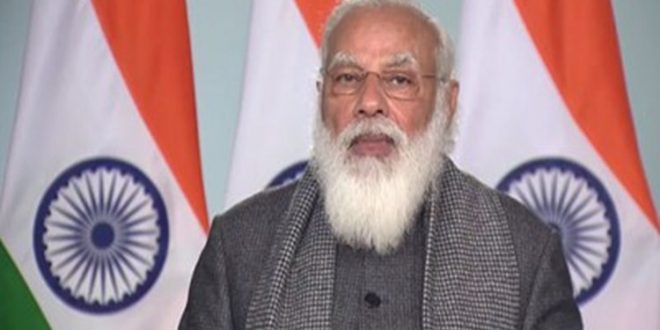 admin July 15, 2021 National Comments Off on UP is making all round development in sectors of health, agriculture, employment, technology and others under leadership of Yogi Adityanath: PM Modi 760 Views

New Delhi;July 15′Prime Minister Narendra Modi on Thursday said that Uttar Pradesh is making all round development in the sectors of health, agriculture, employment, technology and others under the leadership of Chief Minister Yogi Adityanath. He said that the state has done admirable and exemplary work in controlling COVID-19 pandemic in the state.

The Prime Minister was addressing a gathering at BHU in his Parliamentary Constituency Varanasi. He said that Uttar Pradesh leads the country in both Corona sample testing and Covid vaccination. He said that earlier when the Union Government’s Welfare schemes were sent to Uttar Pradesh, due to lack of will of the then governments, they could not be implemented.

Mr Modi said that health sector is growing rapidly in the state. The number of medical colleges has grown four times after 2017 in the state. He said that 550 oxygen plants are under construction in Uttar Pradesh out of which 14 plants have been inaugurated today at Varanasi.

Prime Minister said that the Centre has announced a package of 23 thousand crores and UP will benefit immensely due to that. He said that Kashi has become the medical hub in Purvanchal. He said, all the health facilities are available in Kashi and as a result people need not run to other places for treatment.

Prime Minister said during the last seven years Kashi is making rapid strides in the filelds of rail, health, water, sewerage, tourism and other sectors. He also said that the cleanliness of Ganga and Kashi is priority for all of us.

The Prime Minister said that presently Uttar Pradesh has become best destination for investment for the Industries and  people are getting all the help fron the state to start their business. Several projects and welfare schemes in the field of agriculture are also being implemented in Uttar Pradesh enrichening the lives of the farmers.

Mr Modi said, Chief Minister Yogi Adityanath is doing everything for the development of the state. And the complete transformation is visible in all the sectors in state.

He said that under the rule of Chief Minister Yogi Adityanath, now there is rule of law in Uttar Pradesh and Gundaism and Mafia Raj are now bygone nightmares. The Prime Minister said, corruption is completely wiped out and nepotism is non existent in the state. Earlier the Prime Minister Narendra Modi inaugurated and laid foundation stones for various development projects worth over 1,583 crore rupees. He inaugurated a 100-bed Maternal and Child Health Wing in Banaras Hindu University, multi-level parking at Godauliya, Ro-Ro Vessels for tourism development on River Ganga and three-lane flyover bridge on the Varanasi-Ghazipur Highway.

The Prime Minister also laid foundation stones for several projects and public works worth around 839 crore rupees. These included the Centre for Skill and Technical Support of Central Institute of Petrochemical Engineering and Technology (CIPET), 143 rural projects under Jal Jeevan Mission and mango and vegetable integrated pack house in Karkhiyaon.

The Prime Minister also inaugurated the International Cooperation and Convention Centre – Rudrakash, which has been constructed with Japanese assistance.