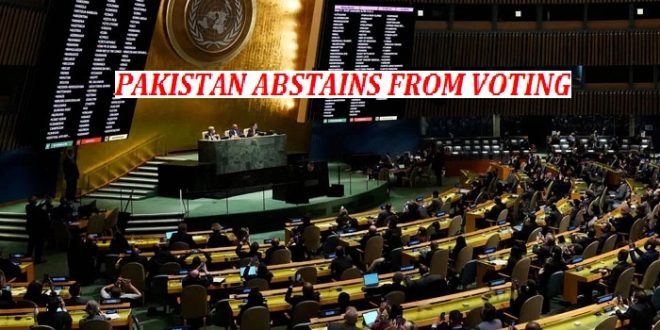 UNITED NATIONS/ ISLAMABAD: The UN General Assembly on Wednesday overwhelmingly adopted a resolution that “demands” Russia “immediately” withdraw from Ukraine, however Pakistan has abstained taking part in voting against resolution. 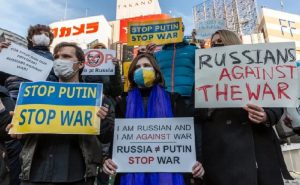 Japan and New Zealand led condemnation from Asia, but the continent’s giants, China, India and Pakistan, all abstained. During the debate Beijing had stressed the world had “nothing to gain” from a new Cold War.

China was among the 35 countries which abstained, while just five, Eritrea, North Korea, Syria, Belarus and of course Russia, voted against it.

Pakistan’s permanent representative at United Nations Munir Akram in his speech urged for dialogue and de-escalation.

“Prime Minister Imran Khan has regretted the latest situation between Russia and Ukraine, and said that Pakistan had hoped that diplomacy could avert military conflict,” he said.

Munir Akram further said that, “we have since repeatedly stressed the need for de-escalation, renewed negotiations, sustained dialogue, and continuous diplomacy.”

At UNGA session after more than two days of extraordinary debate, which saw the Ukrainian ambassador accuse Russia of genocide, 141 out of 193 United Nations member states voted for the non-binding resolution. 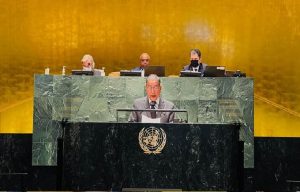 The resolution “deplores” the invasion of Ukraine “in the strongest terms” and condemns President Vladimir Putin’s decision to put his nuclear forces on alert.

The vote had been touted by diplomats as a bellwether of democracy in a world where autocracy is on the rise, and came as Putin’s forces bear down on Kyiv while terrified Ukrainians flee.

“They have come to deprive Ukraine of the very right to exist,” Ukraine’s ambassador Sergiy Kyslytsya told the Assembly ahead of the vote.

“It’s already clear that the goal of Russia is not an occupation only. It is genocide.”

Putin launched the full-scale invasion of Ukraine on February 24. Moscow has pleaded “self-defense” under Article 51 of the UN Charter but that has been roundly rejected by Western countries who accuse Moscow of violating Article 2 of the Charter, requiring UN members to refrain from the threat or use of force to resolve a crisis.

The European Union’s ambassador to the UN Olof Skoog said the vote was “not just about Ukraine.” 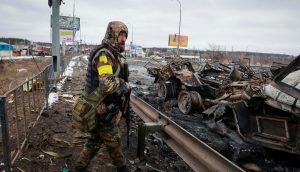 “It is about defending an international order based on rules we all have signed up to,” he said in a statement.

“End hostilities in Ukraine now. Silence the guns – now,” he said in a statement.

“As bad as the situation is for the people in Ukraine right now, it threatens to get much, much worse. The ticking clock is a time bomb.”

The text of the resolution, led by European countries in coordination with Ukraine – has undergone numerous changes in recent days.

It no longer “condemns” the invasion as initially expected, but instead “deplores in the strongest terms the Russian Federation’s aggression against Ukraine.” 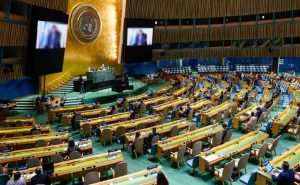 “If the United Nations has any purpose, it is to prevent war,” the US ambassador, Linda Thomas-Greenfield, said during her speech on Wednesday.

She accused Russia of “preparing to increase the brutality of its campaign.”

“We’ve seen videos of Russian forces moving exceptionally lethal weaponry into Ukraine, which has no place on the battlefield. That includes cluster munitions and vacuum bombs, which are banned under the Geneva Convention,” Thomas-Greenfield said.

Russia’s ally Belarus offered a staunch defense of the invasion, however.

Ambassador Valentin Rybakov blasted sanctions imposed by the West on Russia as “the worst example of economic and financial terrorism.”

And he followed other Russian allies such as Syria in condemning the “double standards” of Western nations who have invaded countries including Libya, Iraq and Afghanistan in recent decades.

Other speakers cited fears of a domino effect should Ukraine fall to Russia. Colombia railed against 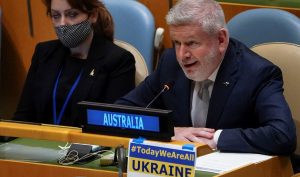 any return to “empire,” while Albania wondered: “Who will be next?”

From the Arab world it was Kuwait, itself the victim of an invasion by Iraq in 1990, whose denunciation of Moscow was the most explicit.

On the meeting’s sidelines, Washington has taken aim at Russians working at the United Nations, leveling accusations of espionage and demanding expulsions.

US President Joe Biden asserted Tuesday in his State of the Union address that Putin had underestimated the response to the invasion.

“He rejected efforts at diplomacy. And, he thought he could divide us here at home,” Biden said. “Putin was wrong. We were ready.”