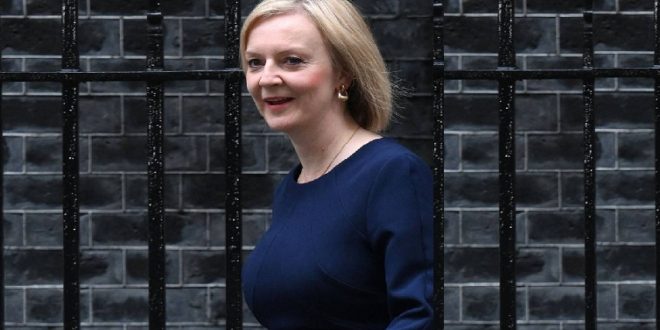 UK’s Liz struggles to save premiership after tax U-turns

LONDON: Britain’s Prime Minister Liz Truss is insisting on her devotion to “sound” economics as she heads into crisis talks with her new finance minister, and a tense week of plotting by Conservative critics.

With even US President Joe Biden joining in attacks on her economic agenda, Truss wrote in the Sun on Sunday newspaper: “We cannot pave the way to a low-tax, high-growth economy without maintaining the confidence of the markets in our commitment to sound money.” 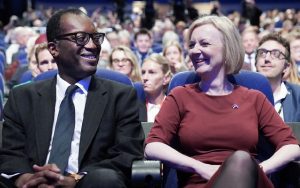 That confidence was jeopardized on September 23 when former Chancellor Kwasi Kwarteng and Truss unveiled a right-wing program, inspired by 1980s US President Ronald Reagan, of 45 billion pounds ($50bn) in tax cuts financed exclusively by higher debt.

Markets tanked in response, driving up borrowing costs for millions of Britons, and the Conservatives’ poll ratings have similarly slumped, leading to open warfare in the governing party mere weeks after Truss succeeded Boris Johnson.

Despite co-authoring the package herself, she fired Kwarteng on Friday. His replacement, Jeremy Hunt, is now dismantling the tax cuts while pressing for spending restraint by his cabinet colleagues even as Britons endure a cost-of-living crisis.

‘The prime minister’s in charge’

Journalist Andrew Simmons, reporting from London, said Truss is trying to convince the markets that she can deliver results as she fights for her political career.

“The conservative government is looking for another leader, there is no doubt about that, but the question is could it lead to a general election,” he said. 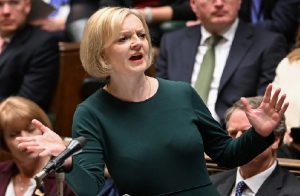 The new chancellor met Truss at the prime minister’s country retreat on Sunday to thrash out a new budget plan he is due to deliver on October 31.

“It’s going to be very, very difficult, and I think we have to be honest with people about that,” Hunt said in a BBC television interview broadcast Sunday.

He defended Truss after her climbdowns, and after a disastrous news conference she held on Friday shortly after sacking Kwarteng.

“She’s been willing to do that most difficult of things in politics, and that is to change tack,” Hunt said, adding: “The prime minister’s in charge.”

The Treasury declined to confirm reports that Hunt plans to delay a planned cut to the basic rate of income tax, removing yet another headline measure announced by the new government last month. 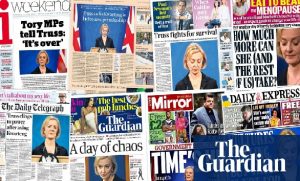 Up to 100 letters expressing no confidence in Truss have been submitted by Conservative MPs, the Sunday Times and Sunday Express said.

Opponents are said to be coalescing around Truss’s defeated leadership rival Rishi Sunak and another one-time foe, Penny Mordaunt, for a possible “unity ticket” to rebuild the stricken Conservatives.

Defence secretary Ben Wallace could be another compromise candidate for leader, the Sunday Mirror reported.

“I worry that, over the past few weeks, the government has … treated the whole country as kind of laboratory mice in which to carry out ultra, ultra-free-market experiments,” Conservative MP Robert Halfon, who supported Sunak, told media. (Int’l News Desk)