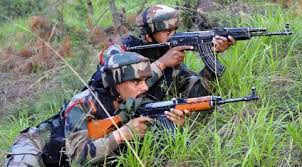 Two terrorists killed in encounter at Pulwama district of J&K

In Jammu & Kashmir, two terrorists were killed in a gunfight with joint forces at Naik Muhalla Tral in Pulwama district today. Security sources said, the search and sanitization operation is still on in the area.

They said, the bodies of terrorists along with two AK 47 rifles have been recovered. Police sources said, they have identified the slain terrorists who were cadres of Hizbul Mujahideen.

In another incident, the joint team of forces launched cordon and search operation in Narwaw area of Shopian district this morning. Security sources said that the operation was launched on the basis of a tip off about the possible presence of terrorists in the area. Details are awaited