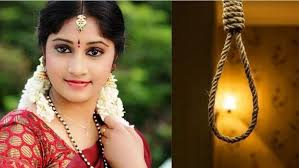 Hyderabad, Feb.6 (PMI): Telugu TV industry actor Naga Jhansi, 21, allegedly committed suicide by hanging herself from a ceiling fan on Tuesday night at her flat in Nagarjuna Nagar Sairam Residency in Srinagar Colony under Punjagutta Police Station. She has been running a beauty parlour also.

It was learnt that Naga Jhansi has been in love with one Surya of Vijayawada for some time. She allegedly spoke to her boy friend on Whatsapp before taking extreme step. Her brother said Jhansi was under depression since five days. She was playing a lead role in Star Maa TVs Pavitra Bandham serial. However, Jhansi stopped acting after she fell in love with Surya.

Jhansi was the native of Vadali village in Mudinepally mandal of Krishna district in Andhra Pradesh State. The police rushed to the spot and seized the body and her cell phone. The body was sent to Gandhi Hospital for post mortem. (PMI)