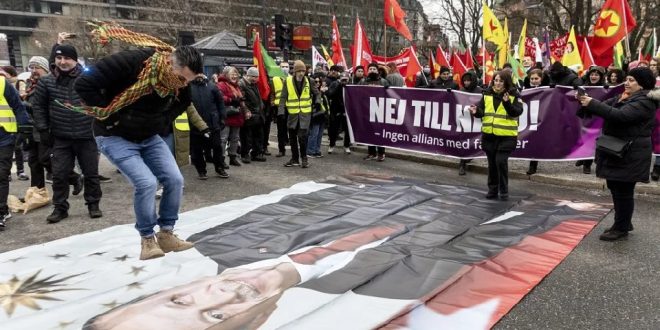 ISTANBUL/ STOCKHOLM: Turkey denounced Sweden after protests in front of its embassy in Stockholm including the burning of a Quran by far-right supporters and a separate demonstration by Kurdish activists. 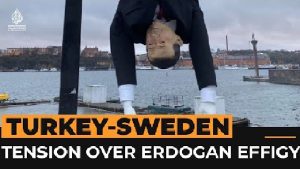 Ankara said on Saturday it was cancelling a visit by Sweden’s defence minister aimed at overcoming Turkey’s objections to its NATO membership. Sweden needs Turkey’s backing to gain entry to the military alliance as fears in Europe grow after Russia’s invasion of Ukraine.

The Quran burning was carried out by Rasmus Paludan, leader of Danish far-right political party Hard Line. In April last year, Paludan’s announcement of a Quran burning “tour” during the Muslim holy month of Ramadan sparked riots across Sweden.

Surrounded by police, Paludan set fire to the holy book with a lighter following a long diatribe of almost an hour, in which he attacked Islam and immigration in Sweden. About 100 people gathered nearby for a peaceful counterdemonstration.

“If you don’t think there should be freedom of expression, you have to live somewhere else,” he said.

The Turkish foreign ministry responded immediately in a statement. 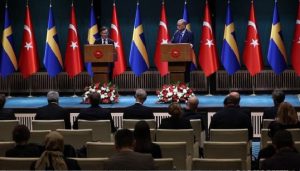 “We condemn in the strongest possible terms the vile attack on our holy book… Permitting this anti-Islam act, which targets Muslims and insults our sacred values, under the guise of freedom of expression is completely unacceptable,” the ministry said.

“Saudi Arabia calls for spreading the values of dialogue, tolerance, and coexistence, and rejects hatred and extremism,” the Saudi foreign ministry said in a statement.

A small group gathered outside the Swedish embassy in Ankara to protest the Quran-burning. A protest was also scheduled to take place in Istanbul on Saturday evening. (Int’l News Desk)