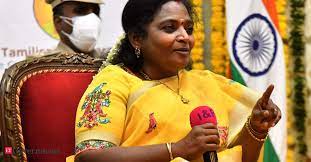 Hyderabad, June2 (PMI):  The Telangana State Formation Day celebrations at the Raj Bhavan, here on Thursday, witnessed the laptop donations to the needy students, cultural performances, and felicitation to some achievers. On the occasion, the Governor felicitated 10 persons from different walks of life for their outstanding achievements and for meritorious services.

Scores of people from different fields thronged the Raj Bhavan to extend happy birthday greetings to Dr Tamilisai Soundararajan. People vied with each other to present bouquets, shawls, books, and mementoes to the Governor at the iconic Durbar Hall of the Raj Bhavan.

Speaking on the occasion, Dr Tamilisai Soundararajan paid rich tributes to the martyrs, who laid down their lives for the cause of separate Telangana State. “Realization of separate Telangana State is the result of numerous sacrifices made by people of the Telangana for the cause during their six-decade long struggle for the separate State,” she added. The Governor thanked President Ram Nath Kovind and Prime Minister Narendra Modi for giving her the opportunity to serve the people of Telangana as the Governor.

“Despite many challenges, I continue to strive to serve the people of Telangana as the Governor and as the Sister of Telangana State,” she said. The Governor also highlighted some of the initiatives like the Nutritional Intervention  Program to improve the nutritional status of the particularly vulnerable tribal groups’ people, Raj Bhavan Annam, donating and mobilizing laptops to the needy students and so on.

Contribution for Sainik Welfare Fund: On the occasion, one Madhava Reddy contributed Rs 50,000 to the Sainik Welfare Fund and the cheque for the same has been handed over to the sainik welfare board officials through the hands of the Governor. Telangana State Formation Day celebrations coupled with the birthday celebrations of the Governor brought a grand festive look to the Raj Bhavan.

Advisors to the Governor APVN Sarma and AK Mohanty and Secretary to Governor K. Surendra Mohan and other senior officials were present. (PMI)