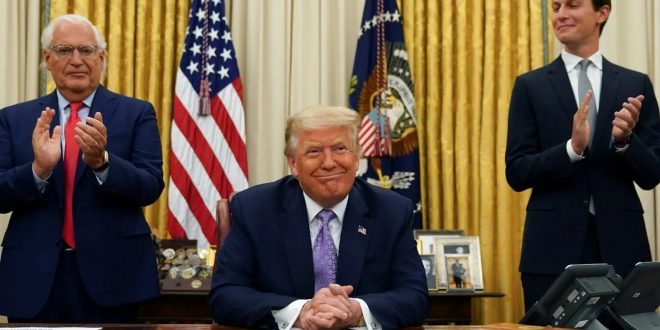 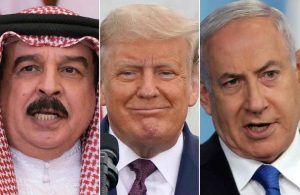 WASHINGTON/ MANAMA/ JERUSALEM/ DUBAI: Bahrain became the latest Arab nation to agree to normalize ties with Israel. The move comes as part of a broader diplomatic push by US President Donald Trump and his administration to fully integrate the Jewish state into the Middle East.

“This is a historic breakthrough to further peace in the Middle East,” Trump, Netanyahu and King Hamad said in a joint statement. “Opening direct dialogue and ties between these two dynamic societies and advanced economies will continue the positive transformation of the Middle East and increase stability, security, and prosperity in the region.”

Trump and Netanyahu both held news conferences providing details on the deal. 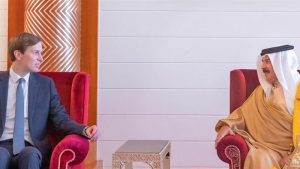 The US president lauded the deal’s potential for “regional transformation,” adding that other countries “want to very much come in.” Trump outlined a brighter future for the troubled region.

“The sand was loaded up with blood, now it will be loaded with peace,” he said.

In turn, Israel’s Netanyahu said he was “moved” by the news of the deal with Bahrain.

“This agreement adds to the historic peace with the United Arab Emirates,” Netanyahu said in a statement.

Bahrain will join the United Arab Emirates (UAE) in signing an agreement to normalize relations with Israel next week. 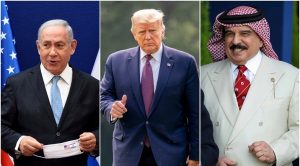 The announcement comes after two weeks of intense lobbying on the part of the Trump Administration, particularly the president’s son-in-law and senior advisor Jared Kushner and Secretary of State Mike Pompeo, both of whom personally visited the king and crown prince of Bahrain, urging them to open full diplomatic relations with Israel.

US Ambassador to Israel David Friedman said Trump’s “policy of peace through strength has changed the world profoundly for the better,” adding, “We’re seeing the paradigm of the Middle East completely change in a very positive way.”

State Department veteran Brian Hook thanked the president, telling him, “I think historians will back on these two peace agreements as the beginning of the end of the Arab-Israeli conflict.”

Trump and several of those who spoke in the Oval Office on Friday made note of the fact that establishing peace in the region would allow the US to bring home troops. According to a June 2020 Congressional Research Report, the US had roughly 5,000 service members stationed at its naval support and air bases in Bahrain at the end of 2019. Bahrain is also the home to US Navy Central Command (NAVCENT) and the Navy’s Fifth Fleet. 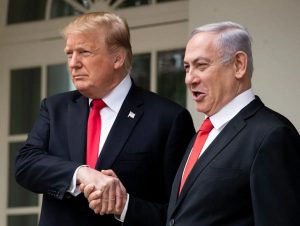 News of the announcement garnered approval from some, like Egyptian Abdel Fattah el-Sissi, who called it an “important step” on the way to establishing, “Peace and stability in the Middle East, in a way that achieves a just and permanent settlement of the Palestinian issue.”

The UAE released a statement in which it “welcomed the decision.”

The Islamic Republic of Iran also condemned Bahrain’s decision “a major act of treason of the Palestinian cause.”

Jordanian Foreign Minister Ayman Safadi said the steps necessary to achieve a “fair and comprehensive peace in the region” would have to be taken by Israel. Safadi called on Israel to stop undermining a two-state solution with the Palestinians, and end its illegal occupation of Palestinian lands.

Turkey also strongly condemned Bahrain’s decision, adding that “it would further encourage Israel to continue illegitimate practices towards Palestine and its efforts to make the occupation of Palestinian lands permanent.”

When the UAE announced it would normalize relations with Israel in August, it became the first Arab state to do so in more than 20 years on Tuesday, the UAE and Bahrain will follow in the footsteps of Egypt and Jordan. Trump has maintained that other Arab states will join as well.

Saudi Arabia has said it has no plans to pursue that route at this time though the kingdom will now allow Israeli commercial air traffic to use its airspace.

Bahrain is a close ally of Saudi Arabia, which sent troops to help the tiny island state put down unrest that erupted there, as well as in neighboring Kuwait and the UAE during the Arab Spring. Bahrain is also home to two US military bases. (Int’l Monitoring Desk)