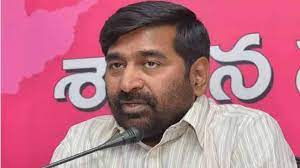 Hyderabad, Nov.8 (PMI): Energy Minister Jagadish Reddy has reiterated that the TRS alliance with the Communist parties will continue in future in Telangana.

Minister Jagadish Reddy along with newly elected TRS MLA Kusukuntla Prabhakar Reddy and another legislator Gadari Kishore called on the Left party leaders at the CPI office here on Tuesday and thanked them for extending their support for the victory of TRS candidate in Munugodu by-election.

Speaking on the occasion, Jagadish Reddy said that they had discussed about the continuation of TRS-Left parties alliance in Telangana in the days to come as the Bharatiya Janata Party (BJP) was becoming a threat to the country and it was killing the spirit of democracy for gaining the political benefits.

” It is the need of the hour to fight together against the BJP. We have also discussed about the impending threat to the country from the BJP and our action plans against the saffron party. We will work together and our alliance will be continued in the future,” Jagadish Reddy said.

He said the people of Munugodu had tought a fitting lesson to the BJP by defeating it’s candidate Rajagopal Reddy in the by-poll and the people gave an end card to the saffron party in Telangana.

Munugodu MLA Kusukuntla Prabhakar Reddy said that he would develop his constituency in all fronts in the days to come and would also take the support of Left party leaders for carrying out development activities. (PMI)