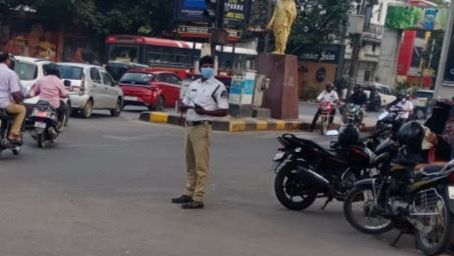 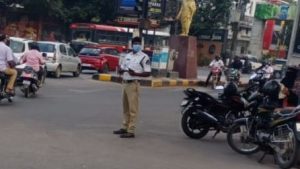 Hyderabad 22 Nov (PMI): The Traffic Police department’s new rule regarding traffic violations are talk of the town these days. Traffic Police started implementing the rules strictly to discipline and bring about behavioral changes among the commuters. Traffic personnel stationed to manage traffic on roads are very busy in capturing photos of commuters who are violating rules but they themselves are not fully well dressed on their duty. Some of the Police personnel are seen sitting at a corner and clicking photographs while some just stand in the center of the road.

Today i.e 22nd November one such incident near Telangana Assembly Circle Cross Road where a traffic Police constable himself was not wearing police “HAT”  but was seen taking photos of traffic violators such as people not wearing helmet, crossing  the stop line, etc.

It is must for higher officials of Police department to know about their staff as well whether the police personnel designated for handling traffic is well attired as per the uniform or he/she is just out there to capture photos of commuters violating any traffic rules and issuing challan immediately to vehicle users which is instantly updated in their system so that violator is penalized at the same time. Looking at this, a question arises whether there is any penalty applicable on public servants who performs their duty dressed inappropriately as this has to be also get into some kind of disciplined (PMI).