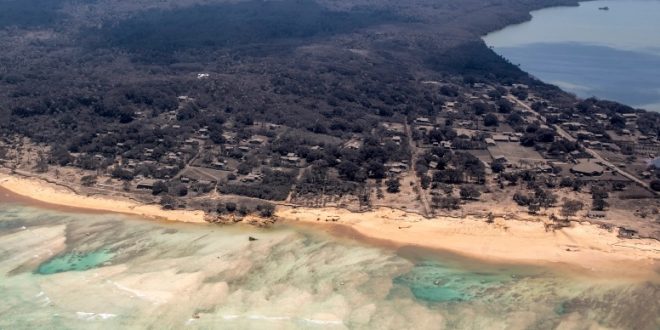 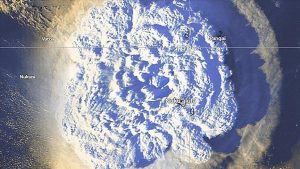 Hunga Tonga-Hunga Ha’apai, an undersea volcano that erupted on Saturday triggering tsunami warnings across the Pacific, has been releasing sulphur dioxide and nitrogen oxide, two gases that create acid rain when they interact with water and oxygen in the atmosphere.

“There is likely to be acid rain around Tonga for a while to come,” Shane Cronin, a volcanologist at the University of Auckland, told media.

Acid rain causes widespread crop damage and could affect Tongan staples such as taro, corn, bananas and garden vegetables. “Depending on how long the eruptions last, food security could be compromised,” Cronin said.

Satellite imagery suggests the plume is spreading westwards, which means Tonga could be spared some of the acid rain at the expense of Fiji.

The United Nations humanitarian affairs office said Fiji was monitoring its air quality and has advised people to cover their household water tanks and stay indoors in the event of rain. 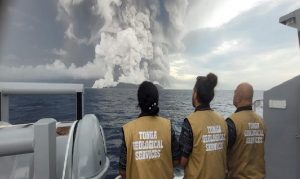 Falling ash could also damage coral reefs, which were already under threat before the eruption.

Tom Schils, a marine biologist at the University of Guam, said: “Vast areas of the reefs in the immediate impact area at Hunga Tonga are probably buried and smothered by large deposits of volcanic ash.”

Eruptions such as the one on Saturday also release more iron into the water, which can boost the growth of blue-green algae and sponges that further degrade reefs, Schils told Reuters.

While scientists have yet to investigate on the ground, available satellite imagery shows a blanket of ash on land. In the ocean, ash can be harmful to marine life, according to the Tonga Geological Services, which has warned that nearby seawater was contaminated with toxic volcanic discharge and that fishermen should “assume fish in these waters are poisoned or poisonous”.

As most Tongans rely on the ocean for their food and livelihoods, scientists have warned of fish perishing or migrating following the eruption. 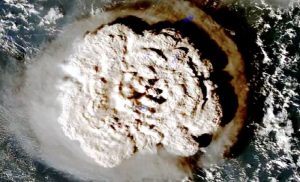 “It will be a while before the same or new fishing grounds will be restored,” Marco Brenna, a geologist at the University of Otago in New Zealand, said.

In the aftermath of the eruption, a Tongan sea-level gauge recorded a tsunami wave of 1.19 metres (about four feet) before it stopped reporting. Tsunamis are known to cause rapid coastal erosion, which in turn causes a loss of coral reefs and affects the ability to cope with rising waters and storm surges.

Tonga valued its natural storm buffers, including coral reefs as well as coastal seagrasses and mangroves, at some $11m annually. Before the coronavirus pandemic, its tourism industry brought in up to $5m a year.

The freak waves produced by the eruption have also been blamed for causing an oil spill at the Pampilla Refinery in Peru, belonging to the Spanish company Repsol.

Peruvian authorities sealed off three beaches on Monday after a “limited spill” of oil off the coast of Callao and Ventanilla districts near the capital, Lima. 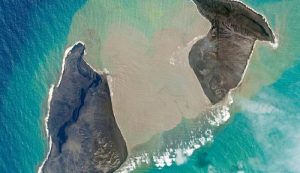 Environment Minister Ruben Ramirez said the accident had affected a 3km (1.8-mile) stretch along the beaches.

“There is great damage to biodiversity, and it could even impact human health,” Ramirez said. “And so it has been ordered that the area is cut off for all kinds of activity.”

The National Emergency Operations Center said in a statement that the spill, which occurred during offloading from a tanker, had been brought under control but local Ventanilla resident Brenda Ramos told media news agency the community remained worried.

“This affects the fishermen, the population that they feed with the fish, and marine animals,” Ramos said. (Int’l Monitoring Desk)