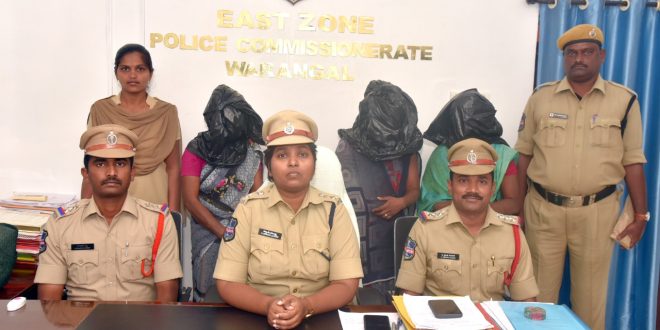 Warangal;Jan 23 ;(PMI)Mamunur police on Monday arrested three women who were involved in prostitution rackets under Warangal Police Commissionerate while another accused is absconding. Police seized Rs 8,400 in cash and three cell phones from them.

In connection with this arrest, East Zone DCP Venkatalakshmi said that the accused, who is currently absconding, formed a gang with Vijayakumar of Kothuru village of Warangal district, Sarita of Rayapuram of Parvatgiri area, Kodam Swaroop of Kesamudram area and Nunny Swapna and made easy money. As a part of this gang, three kiladi ladies lured innocent youths at bus stations with their gestures and lured them and hired a vehicle and took the vidudu along with them and took them to a desolate area in the surrounding villages of Warangal city. Information will be delivered. On receiving the information, the accused Vijay Khiladi used to threaten the youths who were with them who did not reach the area where the ladies were and extorted money.

Thus two cases have been registered by this gang in Mamunur police station in which two cases of Rs 20 thousand cash and a cell phone were looted and Rs 3000 cash and phones worth Rs 2000 were forcibly looted from a person in Dharmaram village in Geesukonda police station limits today with reliable information. Mamunur CI Kranti Kumar along with his staff arrested the three women accused at Rangopalapuram. Mamunur ACP Naresh Kumar, Inspector Kranthikumar, S.I. who showed talent in catching these three accused. East Zone DCP congratulated Rajesh Reddy, Constables Sartharposha, Dalan(PMI)