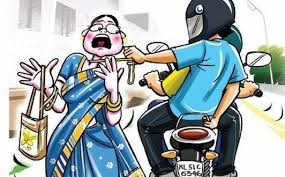 Hyderabad, Jan.9 (PMI): The Commissioner’s Task force, in a joint operation with Bhavaninagar Police and SOT Rachakonda, apprehended three members of an Interstate chain snatching gang today As many as 120 Teams were formed across Hyderabad Police Commissionerate to prevent the spree of snatchings and apprehend the accused. The criminals were interrogated and surveillance was kept over important places.

Accused Chintamalla Praneeth Chowdhary of Vanasthalipuram helped the criminals from UP in committing snatching offences in the surrounding areas of Vanasthalipuram. The Valmiki and Choka of UP landed in the city a few days prior to commit offences and took shelter in various lodges.  They hired a KTM bike from one Sofiyan of Malakpet on rental basis and the trio roamed in Vanasthalipuram, Hayathnagar, Meerpet, L.B. Nagar and surrounding areas till  Monu and Choka got themselves acquainted with the topography of the area. On December 26 and 27 Choka and Monu Valmiki committed 11 chain snatchings from women of all age groups, under the limits of L.B. Nagar, Vanasthalipuram, Meerpet, Hayathnagar and Chaitanyapuri on the KTM bike. They committed 11 snatchings within 15 hours i.e. six snatchings on December 26 in four hours and five snatchings on the next day within an hour.

However, Praneeth did not participate in the chain snatchings for fear of being identified in CCTV footages but only directed Choka and Monu Valmiki. Monu and Choka were apprehended at Anmol Hotel, Edibazar while they were moving on a Pulsar motorcycle. The accused were found in possession of a knife, which they kept for threatening the public in a situation of being chased. During interrogation, they revealed that they abandoned the KTM motorcycle beside Railway line in Talabkatta, as they feared of being identified through motorcycle which was given wide publicity by media by transmitting the CCTV footages of motorcycle. Third accused Praneeth was apprehended in a lodge at Kachiguda and recovered the entire property.

In the operation, Task Force Teams of South and East Zone, Bhavaninagar (L&O) team, SOT Rachakonda participated.  In view of the festival season, the police appealed to the citizens under the three Commissionerates not to leave precious jewellery in their houses while going out of the city and inform the neighbours/apartment associations and local police in advance. The citizens were requested to report any suspicious movement of strangers, if noticed. (PMI)