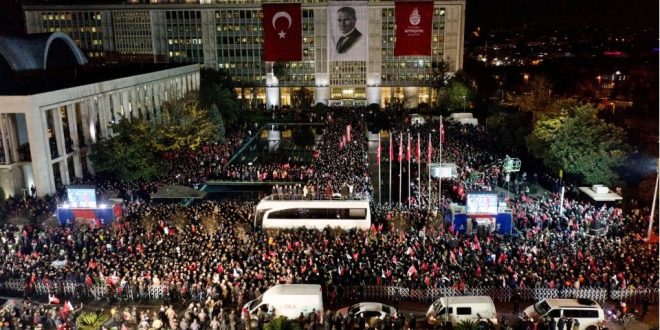 ISTANBUL: Thousands of people in Istanbul have protested against the conviction and political ban of the city’s Mayor Ekrem Imamoglu, voicing criticism of Turkey’s government ahead of elections next year that are set to pose a major test to President Recep Tayyip Erdogan’s two-decade rule. 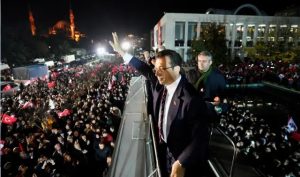 A Turkish court on Wednesday sentenced Imamoglu, a popular rival to Erdogan, to two years and seven months in prison for insulting public officials.

The sentence and the political ban must be confirmed by an appeals court, and Imamoglu will continue to serve as mayor of Turkey’s largest city while his appeal is heard. The verdict drew wide criticism at home and abroad.

As patriotic music rang out, crowds waved Turkish flags in front of the Istanbul municipality building in the city of 16 million people on Thursday. A large portrait banner of Turkey’s founder Mustafa Kemal Ataturk was hung from the building.

The 52-year-old Imamoglu and the leaders of six Turkish opposition parties walked out shoulder to shoulder through the crowd of supporters on Wednesday.

“I am absolutely not afraid of their illegitimate verdict,” Imamoglu told the crowd. “I don’t have judges to protect me, but I have 16 million Istanbulites and our nation behind me.” 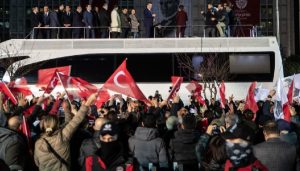 He said his jail sentence punished his success.

“Sometimes in our country, no success goes unpunished,” he said. “I see this meaningless and illegal punishment imposed on me as a reward for my success.”

A senior journalist Sinem Koseoglu, reporting from the rally in Istanbul, said even if the court of appeals upholds the verdict, then Imamoglu can challenge the verdict at the Supreme Court.

“Until the final decision by the Supreme Court, Ekrem Imamoglu has the legal right to stay as the mayor of Istanbul and the political ban on him will not be imposed,” Koseoglu said “but, many people here … are saying that yesterday’s court decision is totally unlawful.”

Imamoglu was convicted for insulting public officials in a speech he made after he won Istanbul’s election in 2019. Critics say Turkish courts bend to Erdogan’s will. The government says the judiciary is independent.

The US Department of State said it was “deeply troubled and disappointed” by the potential removal of Imamoglu.

Germany called it “a heavy blow to democracy” while France urged Turkey to “reverse its slide away from the rule of law, democracy and respect for fundamental rights”. 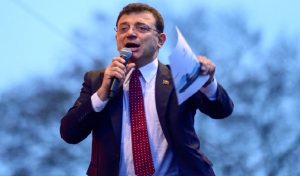 Presidential and parliamentary elections due to be held by June may be the biggest political challenge yet for Erdogan after two decades in power, as Turks cope with rising costs of living after a currency collapse and inflation surge.

The six-party opposition alliance formed against Erdogan, led by Imamoglu’s Republican People’s Party (CHP), has yet to agree on their presidential candidate. Imamoglu has been mooted as a possible challenger and polls suggest he would defeat Erdogan.

Imamoglu was tried over a speech in which he said those who annulled the initial 2019 vote in which he narrowly defeated a candidate from Erdogan’s AK Party were “fools”. Imamoglu says his remark was a response to Interior Minister Suleyman Soylu for using the same language against him.

After the initial results were annulled, he won the rerun vote comfortably, ending the 25-year rule in Turkey’s largest city by the AK Party and its predecessor, the Welfare Party. (Int’l Monitoring Desk)