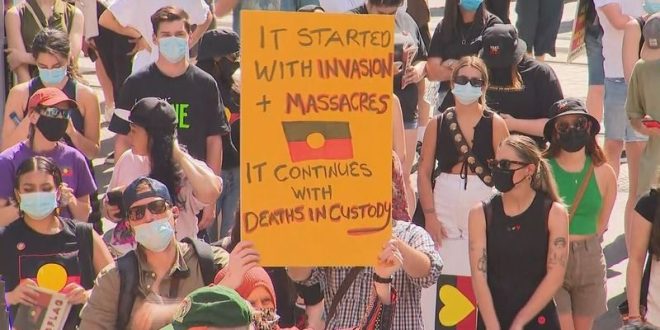 Thousands march across Australia in protest of ‘Invasion Day’ 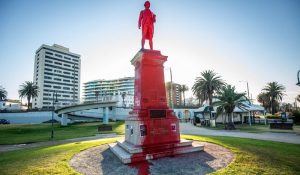 CANBERRA/ MELBOURNE: Thousands of people are gathering in ‘Invasion Day’ rallies across the country, in protest of Australia’s national holiday.

Crowds have taken to the streets of capital cities across Australia, asking for the date of Australia Day to be changed.

Many First Nations people refer to January 26 as the ‘Day of Mourning’ or ‘Survival Day,’ as is falls on the date the First Fleet arrived in Australia.

Protests have erupted in Sydney’s CBD, with hundreds gathering to show their support for Indigenous Australians, some brandishing signs with the words “Change the date”.

However, protests in Melbourne have been cancelled due to COVID-19.

It’s the first time in 15 years that the event has been cancelled. 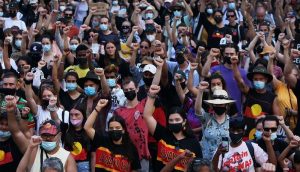 In Adelaide, people marched down King William Street from Victoria Square/ Tarntanyangga in the CBD.

In Brisbane, wet weather did not deter the hundreds of protesters that took to the streets.

At a rally in Queen’s Garden, demonstrators were urged to wear a mask, socially distance and stay at home if they were unwell.

The crowd then marched to Musgrave Park across the river.

“Every year I come here and fight for our rights,” one protester said.

Indigenous Elder and co-organizer of the protest, Deborah Sandy, bore the Aboriginal flag, now copyright-free for the first time, with pride. 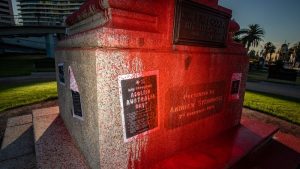 “Some of the best news we’ve had for a couple of years,” she said.

Protesters said they would not leave the city until the date had been changed.

“Governments and councils should abolish Australia Day celebrations or possibly change the date to another day,” Sandy said.

Co-organizer Regina Bonner said the march had become an annual tradition that would continue until justice has been achieved.

“Events like this bring us together, there’s a lot of division, especially with the Sovereignty side of things, we’ve got issues in Canberra and we also have it within our own nation so we’re trying to get on top of that,” she said.

Traditional elder Des Sandy, whose grandfather was born on land that is now the Brisbane Botanic Gardens, says he hopes stronger reconciliation is on the way. 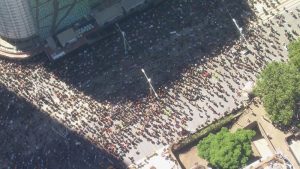 The statue was found defaced in Catani Gardens, St Kilda in the early hours of the morning, with Victoria Police decrying the “absolutely ridiculous” act.

“Whilst we understand people have certain views about this day, we always ask people to be respectful and blatant criminal activity like that will not be tolerated,” Assistant Commissioner Glenn Weir told today.

The statue has previously been targeted by vandals, particularly on Australia Day.

Security guards were hired to protect the statue last year.

Assistant Commissioner Weir said police were undertaking a number of avenues of inquiry and searching for CCTV to catch the vandals. 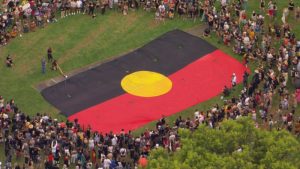 “We’re asking anyone who saw any suspicious activity around that statue and may have any information to contact us at Crime Stoppers,” he said.

January 26 marks the day when Captain Arthur Phillip raised the British flag at Sydney Cove and proclaimed British sovereignty, in 1788.

The move led to the dispossession of Indigenous peoples from the land they had inhabited for thousands of years up to the arrival of the First Fleet.

Every year, calls grow to change the date of Australia Day to be more inclusive of all Australians.