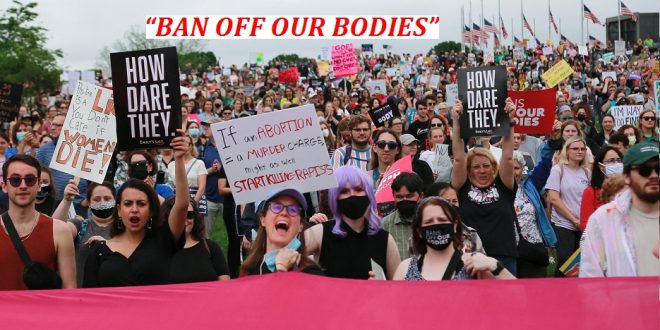 Thousands in US march for abortion rights

WASHINGTON: Thousands of abortion rights supporters rallied across the United States, angered by the prospect that the Supreme Court may soon overturn the landmark Roe v. Wade decision that legalized abortion nationwide a half century ago. 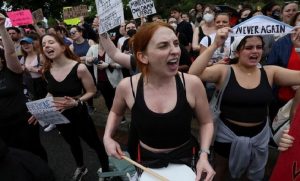 The protests kicked off what organizers predict will be a “summer of rage” ignited by the May 2 disclosure of a draft opinion showing the court’s conservative majority ready to reverse the 1973 ruling that established a woman’s constitutional right to terminate her pregnancy.

The court’s final ruling, which could return the power to ban abortion to state legislatures, is expected in June. About half of the 50 states are poised to ban or severely restrict abortion almost immediately should Roe be struck down.

“If you can’t choose whether you want to have a baby, if that’s not a fundamental right, then I don’t know what is,” said Brita Van Rossum, 62, a landscape designer who traveled from suburban Philadelphia to join the abortion-rights rally in the nation’s capital, her first ever.

Protesters marching under the slogan “Bans Off Our Bodies” took to the streets from New York and Atlanta to Chicago and Los Angeles in a show of outrage that Democrats hope will help galvanize support for their party and blunt projected Republican gains in the November elections.

The day’s largest demonstration unfolded in Washington, where a crowd that organizers estimated at 20,000 people massed at the Washington Monument and braved a light drizzle to march along the National Mall past the U.S. Capitol to the Supreme Court itself. 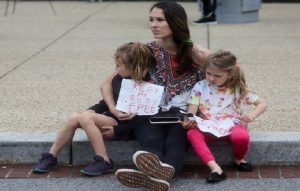 The rally erupted in shouts of “Shame” and “Bans off our bodies” as the marchers neared the marbled columns of the courthouse.

Surrounded by police was a group of a few dozen counter-demonstrators holding signs that read; “End abortion violence” and “Women’s rights begin in the womb.”

The encounter between the two sides grew tense at times. Abortion rights protesters shouted, “Go home!” and one man whacked a counter-demonstrator in the head with his poster after profanities were exchanged. As the-anti abortion protesters left, they waved at the crowd, and a few called out, “Bye, Roe v. Wade!”

The rally appeared to remain otherwise peaceful, though at least one counter-protester was seen being escorted away by a security guard in Washington earlier in the day.

The mood was likewise energetic, and sometimes contentious, in New York City as thousands of abortion rights supporters crossed the Brooklyn Bridge into Manhattan, where they were confronted by a half dozen anti-abortion activists. 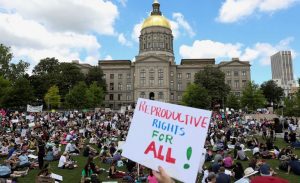 Police officers arrived to maintain space between the two groups as they traded taunts and vulgarities. The crowd thinned out in early afternoon as rain fell over the city.

Elizabeth Holtzman, an 80-year-old former congresswoman who represented New York from 1973 to 1981, said that the leaked Supreme Court draft opinion “treats women as objects, as less than full human beings.”

Celebrity women’s rights attorney Gloria Allred told the crowd about her own “back alley abortion” as a young woman when she became pregnant from a rape at gunpoint before Roe. “I almost died,” she recounted. “I was left in a bathtub in a pool of my own blood, hemorrhaging.” (Int’l Monitoring Desk)