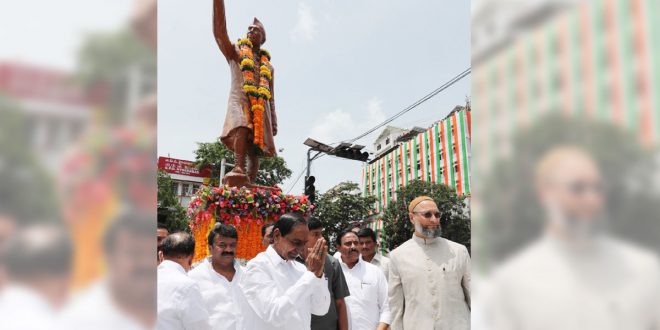 Telangana froze for a minute for mass singing of national anthem

Hyderabad, Aug.16 (Press media of india): As part of country’s 75th Independence Day celebrations, the Telangana government on Tuesday organised India Independence diamond jubilee celebrations on a grand scale. On the occasion, the officials organized collective singing of national anthem all over the State. As the clock struck 11.30 am, the traffic lights at all junctions turned red as people joined the mass recital of the national anthem.

On the occasion, the police made elaborate bandobust arrangements. In several main thoroughfares in the State capital, students participated in collective singing of national anthem along with ministers and public representatives. In all the traffic junctions, the traffic police arranged one-minute red signal. In the districts too, the Independence celebrations were organized in a grand scale.

The people all over the State sang national anthem at the same time for a minute. With this, the State capital remained paralysed for a minute. Even the Metro trains remained at a standstill at the appointed time. All the public and private buses, all types of motor vehicles came  to a standstill for a minute and the travelling public joined in the chorus of national anthem. People at traffic junctions, markets, offices, educational institutions, malls and other public places across villages and towns participated in the program.

People gathered in gram panchayats, urban local bodies and other places for the mass recital. Employees in the government offices and students in schools and colleges also joined the recital. Patriotic fervor gripped the entire State. The venues were reverberated with the slogan of “Bolo Swatantra Bharat Ki Jai”.

As part of the two-week-long celebrations, the State government had distributed 1.2 crore national flags across the State through door-to-door distribution. The government also organised screening of Richard Attenborough’s film ‘Gandhi’ for school children at 563 movie theatres, and conducted freedom runs.

Vajrotsava Committee Chairman Keshav Rao appealed to the people to make grand success of the valedictory function of the Vajrotsavalu organised at the LB Stadium on August 22. The CM will deliver keynote address in the function, he added. (PMI)