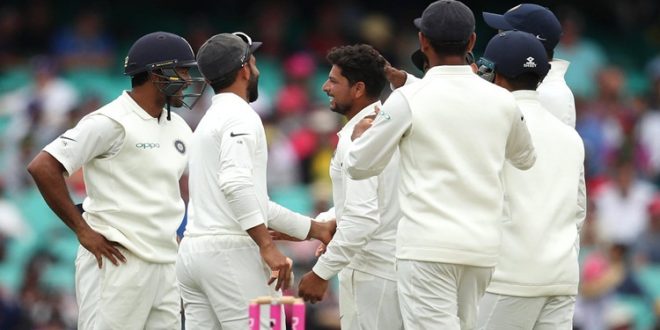 Sydney Test: Aus all out for 300, India enforce the follow-on

In Cricket, India bundled out Australia for 300 in the first innings and enforced a follow-on on the fourth day of the Sydney Test today.

Team India had made 622 for 7 after opting to bat.

Australia were six for no loss, trailing by 316 runs, when early tea was taken due to bad light.

The match was later called off for the day as the situation remained the same, with Team India staying well on course to a historic first series win in Australia since they first toured the country in 1947-48.

In the morning, the Aussies had resumed their first innings at the overnight score of 236 for 6, after the start of proceedings was delayed due to rain.

The hosts were skittled out for 300, courtesy spinner Kuldeep Yadav’s five-wicket haul in his maiden Test on Australian soil.

It was also the first time since 1988 that Australia were forced to follow-on at home.

Earlier, centuries from Cheteshwar Pujara and Rishabh Pant had powered India to a score of 622 for 7 declared.

This is the final Test of the 4-match Border-Gavaskar Trophy. India is leading the series, 2-1

Post Views: 347
Share
Previous PM Modi hits out at Chandrababu Naidu for joining hands with Congress
Next Afghanistan: 30 killed, seven injured when a gold mine collapsed