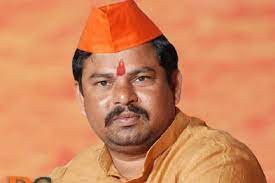 Hyderabad.Nov’14’2022- Suspended BJP MLA Raja Singh has voiced his anger after his bulletproof vehicle broke down here on Monday.

He slammed the Telangana government for providing a vehicle which is in poor condition despite the fact that he faces threat to his life from terrorists.

Raja Singh, who was released from jail last week, had to call his personal vehicle after the one provided by the state police broke down in Afzal Gunj area.

The MLA from Goshamahal called an official to lodge the protest. He said the state intelligence officials provided him the bullet proof vehicle after the central intelligence agencies stated that he faced threat to his life.

The legislator said four months ago the vehicle broke down and when he sent it to the intelligence office, they repaired and sent back the same.

He claimed that the vehicle broke down again two months ago when he was going to Nampally Court. He reached the court in an autorickshaw with the help of a security guard.

After remaining in jail for more than two months, Raja Singh was released on November 9 after the Telangana High Court set aside action against him under the Preventive Detention Act.

The court has asked the MLA not to make any provocative speeches against any religion or post any derogatory or offensive posts on any social media platforms.

The police took the action after continuing protests for his re-arrest for allegedly making derogatory comments about Prophet Mohammad.

According to police, Raja Singh, a rowdy sheeter of Mangalhat Police Station, has been habitually delivering provocative and inflammatory speeches and driving a wedge between communities leading to public disorder.

A total of 101 criminal cases have been registered against him since 2004.

He was involved in 18 communal offences in the limits of different police stations in Hyderabad.