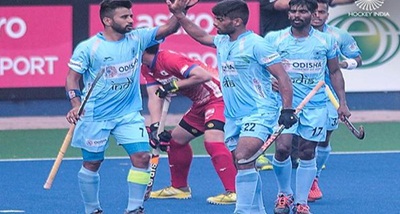 In Men’s Hockey, a second round-robin match between India and South Korea ended in a draw with a score of one goal each, in the Sultan Azlan Shah Cup at in the Malaysian city of Ipoh yesterday. The match was suspended temporarily due to inclement weather. In the tournament opener yesterday, five-time winners India defeated Asian Games gold medalist Japan 2-nil to begin their campaign on a positive note. Varun Kumar and Simranjeet Singh were the goal scorers.

India will now play with  Malaysia on Tuesday, Canada the next day and Poland on Friday. Top two teams at the end of the round-robin stage will meet each other in the Final on Saturday.

Australia, which clinched the title last year, is not playing in this edition