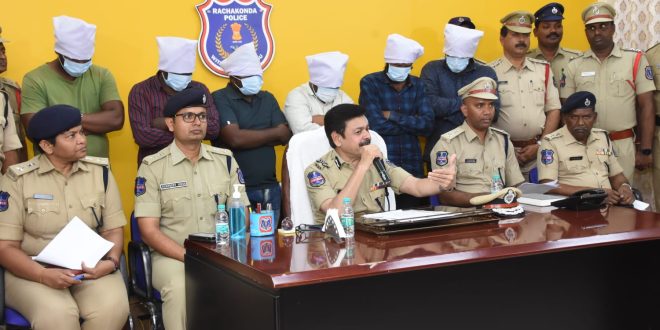 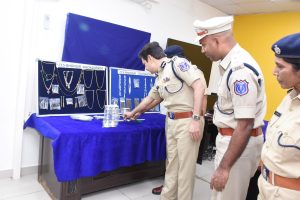 Sleuths of CCS Bhongir and Mothkur PS apprehended six ‘House breaking by Night’ offenders and recovered property worth Rs. 32,83,000/- (50 tulas gold ornaments, 2.5 kg silver ornaments, two bikes and (09) cell phones) from their possession. As per reliable and technical information, four police teams have put A-1, Bodige Ashok’s house under surveillance at Valigonda village foe quite some time. On 23.01.2023 at around 1800 hours, A-1 was apprehended and subsequently interrogated, he confessed to all the below mentioned offences committed by him along with A-2 to A-6. Later on as per the information given by the A-1, we arrested the  A-2 to A-5 at their residences in the village of Peddakaparthi and A-6 at his  village Sabbidigudem of Narketpally mandal and they all confessed all the offenses in 34 cases.

Brief History of the Accused: 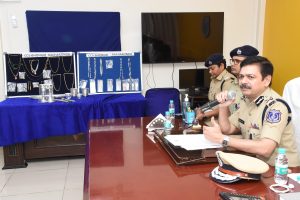 The accused A-1 to A-6 are habitual house breaking offenders.  A-1 belongs to Valigonda Village and mandal Of yadadri bhongir Dist, A-2 to A-5 are belongs to  Paddakaparthi village of Chitiyal mandal, Nalgonda Dist. A-6 is belongs to Sabbididigudem village of Narketpally mandal, Nalgonda, Dist.  A-1 to A-3 started HB By Night offences in 2007 and were sent to Judicial remand by Hayatnagar police. After being released they did not change their attitude and continued committing offences. In 2019 A-1 to A-3 were arrested by Nalgonda Police and sent to Judicial custody again. In 2020 A-4 to A-6 joined A-1 to A-3 and committed HB by Night offences in Mothkur, Athmakur, Valigonda, Addagudur, Ramannapeta, Yadagirigutta, Rajhapata Police Station limits of Rachakonda Commissionerate, and Nalgonda, Mahaboobabad Districts also.  In 2022, A-1 and A-2 were arrested by Munugode Police and sent to judicial custody while A-3 to A-6 continued to commit offences in Rachakonda Commissionerate and Nalgonda districts’ Shri Devender Singh Chauhan IPS, Rachakonda Police Commissioner,said 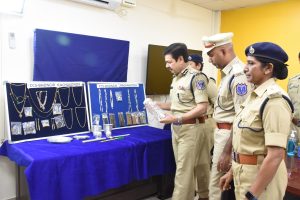 A-1 to A-6 are Habitual Housebreaking offenders; they target isolated roadside houses in village outskirts. After consuming liquor, they break into locked houses and commit offences, sometimes in many houses of the same village in night. A-1 to A-3 break locks with iron rod and enter into houses, while A- 4 to A-6 lurks outside the houses.