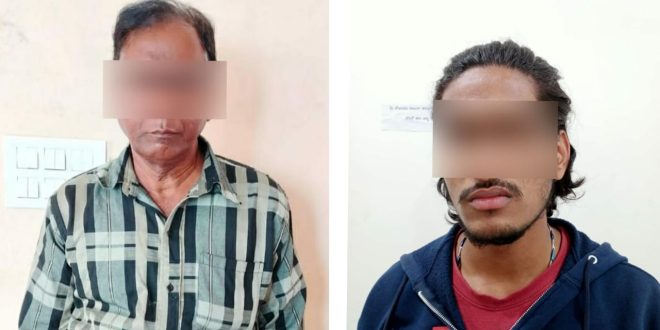 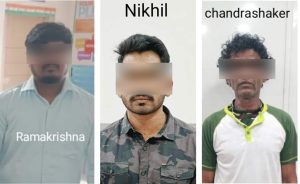 Hyderabad;JAN 07’2023-As part of Preventing Crimes against women, SHE Teams conducts number of awareness programmes in various Govt & Private educational institutions by educating the students on Do’s and Dont’s while using mobile phones and otherwise, and make them aware of consequences of offences when done against women.
Students are provided the ways and means to approach SHE Teams thru Direct, Social media handles, Whatsapp etc., with a mention to reach us anytime in need.
One such information to SHE Team was given by students of a school, revealing about the Ganja consumers in the neighbourhood of their School.
SHE Teams caught one person D. Chandrashekhar, 42 yrs, watchman, r/o Amberpet, along with 8 Packets of Ganja, and handed over him to PS Kachiguda subsequently FIR is filed against him u/s 8c r/w 27 NDPS Act.

A Victim approached SHE Teams complaining that a person cheated her in the name of love and marriage, made her pregnant and trying to marry another girl. Upon enquiry, it is found true, subsequently handed over the accused A.Nikhil s/o Immanual, 27 yrs, PC (AR) to PS Punjagutta and an FIR u/s 376(2)(n) is filed against him.

In a similar such case, SHE Teams caught accused P.Ramakrishna s/o Vijay Kumar, 32 yrs r/o East Marredpally who have cheated one staff nurse in the name of marriage, used her to satisfy his sexual desires and avoiding her when she requests for marriage. SHE Teams handed over the accused to PS Tukaramgate and FIR is filed against him to that effect.

Victim approached SHE Teams thru Whatsapp on the accused forcing her to marry inspite of rejecting his proposal thereby causing her mental trauma with continuous calls and follow up. SHE Teams caught the accused with relevant recordings and registered a case u/s 290 IPC & 70(c) of City Police Act, subsequently produced before Hon’ble XI Spl. MM, Nampally.

A Xerox shop person misbehaved with a student by touching her private parts while she was collecting photocopies. Shocked by the incident, she reported the crime to SHE Teams thru her School Headmistress. After conducting local enquiry, SHE Teams caught the accused Syed Tajamul Hussain s/o Ilyas Hussain, 53 r/o Falaknama, and produced before Hon’ble III Spl MM, Nampally u/s 290 IPC & 70(c) of City Police Act.