Hyderabad: Senior IAS officer A Santhi Kumari has been appointed as Chief Secretary to the Government of Telangana in place of Somesh Kumar. 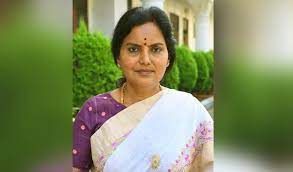 The State government issued orders to this effect on Wednesday, with the notification to be published in the extraordinary issue of the Telangana Gazette. The 1989 batch officer is being appointed in place of Somesh Kumar, whose allotment to Telangana via an order of the Central Administrative Tribunal was quashed by the Telangana High Court on Wednesday.

An postgraduate in marine biology, Santhi Kumari also completed her MBA in the US. She served in various capacities in erstwhile Andhra Pradesh and later in Telangana. Previously, she was serving as the Special Chief Secretary for Environment and Forests department.

Share
Previous This canine is the world’s most ‘intelligent dog’
Next BRS win in Sircilla CESS election a trailer, full movie in December, says KTR