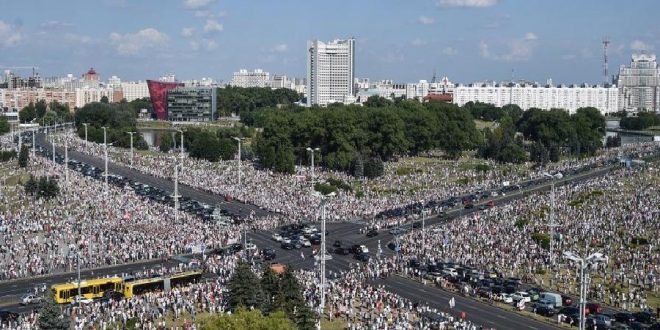 Sea of people against Belarusian President

MINKS: Tens of thousands of people marched through Minsk calling on Belarusian President Alexander Lukashenko to step down in mass demonstrations that showed no sign of abating nearly a month after an election his opponents say was rigged. 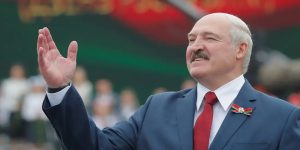 Columns of protesters defied a government warning not to march, waving red-and-white opposition flags and shouting “go away” and “you’re a rat”.

The interior ministry said at least 100 people were arrested. Russia’s Interfax news agency reported several people were injured when police broke up a protest outside a state-run tractor factory.

Video footage shown by local media outlet TUT.BY showed women shouting “shame” at masked members of the security forces who dragged people away into detention. Troops, water cannon, armoured personnel carriers were deployed to the city centre ahead of the march. 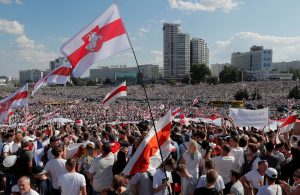 “This sea of people cannot be stopped by military equipment, water cannons, propaganda and arrests. Most Belarusians want a peaceful change of power and we will not get tired of demanding this,” said Maria Kolesnikova, a leader of the Coordination Council set up by the opposition to try to arrange a dialogue with the 66-year-old Lukashenko about a transition of power.

Daragh McDowell, principal analyst at the global consulting firm Verisk Maplecroft, said economic factors are playing a signifcant role in the demonstrations with the country “rapidly running out of money”.

“The IT sector has been repeatedly undermined with the internet shutdowns to disrupt the protesters. We’ve also seen a lot of strikes in the state-owned sector as well. So the Belarussian economy is really on the brink,” McDowell told Al Jazeera.

“The people have lost their fear of Lukashenko, he’s lost a lot of his authority. No matter how many riot police he’s deployed to the streets, it just hasn’t stopped people from continuing to come out.” 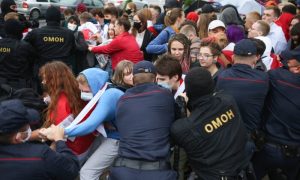 Lukashenko has been in power since 1994 and, buoyed by a show of support from traditional ally Russia, has rejected calls for new elections.

Unprecedented protests broke out after Lukashenko claimed re-election with 80 percent of the vote on August 9.

Opposition rival Svetlana Tikhanovskaya said she won the election, but Lukashenko’s security forces have arrested thousands of protesters, many of whom accused police of beatings and torture.

Several people have died in the crackdown, but Belarusians have been demonstrating across the country for nearly a month, with more than 100,000 people flooding the streets of the capital, Minsk, for four straight weekends.

Dozens of people, including student protesters and journalists covering rallies were arrested this week. 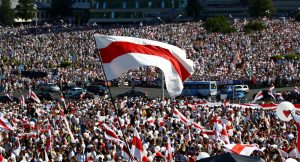 The interior ministry said in a statement that 91 protesters had been detained on Saturday, and said it would beef up security and take “take all necessary measures to suppress such actions and prevent violations of public order” on Sunday.

Tikhanovskaya, who will travel to Warsaw to meet the Polish prime minister next week, said in a video address on Saturday the momentum of the protests was irreversible.

“Belarusians have already changed, they have awakened and it is impossible to push them back into the former mindset. Remember we are strong as long as we are united,” Tikhanovskaya said.

Tikhanovskaya contested the election after her blogger husband was jailed and barred from running along with several other prominent Lukashenko critics.

She left Belarus under pressure from authorities and took shelter in EU member Lithuania. 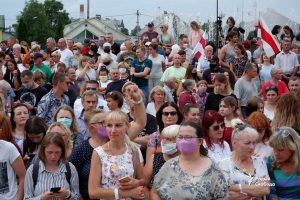 for sanctions against those responsible for the alleged electoral fraud and rights violations.

The Baltic nations of Lithuania, Latvia, and Estonia have blacklisted Lukashenko and 29 high-ranking officials in his administration, but other European Union members appear reluctant to target the Belarus strongman personally.

In an interview published in the Financial Times on Sunday, Lithuania’s foreign minister urged the European Union to impose sanctions on Belarus and counter Russia’s influence or risk undermining the credibility of its foreign policy.

“Sometimes we react too late and our measures are fragmented and aren’t making any impression on society or the people in power,” Linas Linkevicius said.

Lithuania, Latvia and Estonia have imposed travel bans on Lukashenko and 29 other Belarusian officials without 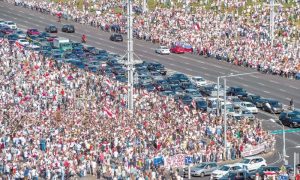 waiting for the rest of the EU to act, signalling impatience with the West’s cautious approach.

Russia has said it will respond to any Western attempts to “sway the situation”, and President Vladimir Putin has raised the possibility of sending military support.

Putin has been eager to unify Russia and Belarus, and Moscow has accompanied its recent offers of economic and military aid with calls for tighter integration.

Lukashenko has in the past ruled out outright unification and sought to play Moscow against the West, but his options now are limited.

On Thursday, Lukashenko hosted Russian Prime Minister Mikhail Mishustin and replaced the chief of the KGB security service in what some analysts said might have been done under pressure from Moscow. (Int’l Monitoring Desk)