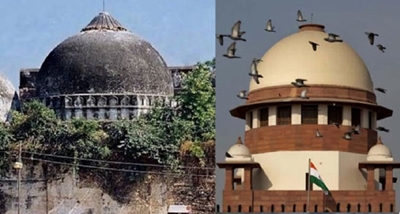 Supreme Court has fixed hearing in the Ram Janmabhoomi-Babri Masjid land title dispute case for 29th of this month. The Constituition Bench hearing the case  is to be reconstituted after Justice UU Lalit recused himself from the case.

Senior advocate Rajeev Dhavan, appearing for a Muslim party, told the bench headed by Chief Justice Ranjan Gogoi that  Justice Lalit appeared for former Uttar Pradesh chief minister Kalyan Singh in 1994. Though Dhavan said he was not seeking Justice Lalit’s recusal, the judge opted out of the hearing in the matter. Other members of the bench comprised Chief Justice Ranjan Gogoi and Justices SA Bobde, NV Ramana, and DY Chandrachud.

Dhavan also drew the attention of the bench to the fact that the matter was earlier fixed for hearing before a three-judge bench but the CJI took a decision to list it before a five-judge Constitution Bench.

The CJI said in view of the  facts and circumstances of the matter and the voluminous records pertaining to it, this was a fit case for constituting a five-judge bench.

In its order, the bench said the apex court registry will physically examine the records stored in 50 sealed trunks in the room, which has also been kept sealed.

The top court said the records pertaining to the matter are voluminous and some of the documents are in Sanskrit, Arabic, Urdu, Hindi, Persian and Gurmukhi that need to be translated. If required, the apex court registry can take the service of official translators, the bench said.

As many as 14 appeals have been filed in the apex court against the 2010 Allahabad High Court judgement. The High Court had ordered that the 2.77 acre land be partitioned equally among the three parties – the Sunni Waqf Board, the Nirmohi Akhara and Ram Lalla. Various Hindutva organisations have been demanding an ordinance on early construction of Ram temple at the disputed site in Ayodhya. Recently, Prime Minister Narendra Modi had suggested that any decision on an ordinance on Ram temple in Ayodhya can happen only after the completion of the judicial process.