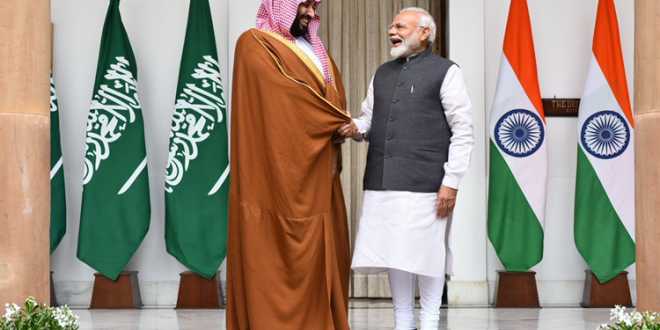 According to the Ministry of External Affairs, India has decided to extend the e-Visa facility to Saudi nationals.  Crown Prince also announced the increase in quota for Indian Haj pilgrims to 200,000.

A joint statement issued after the talks said, both sides noted the potential of cooperation in the renewable energy sector, not only in investment but also in research and development.

In another significant move, Saudi Arabia has also agreed to resolve issues relating to Indian workers who are currently stranded in the kingdom due to the closure of a foreign company.

The two sides called on all states to reject the use of terrorism against other countries, dismantle terrorist infrastructures and to cut off any kind of support and financing to the terrorists.

They also noted the need for concerted action by the international community against terrorism including through early adoption of the UN Comprehensive Convention on International Terrorism.

The Prime Minister and the Crown Prince condemned in the strongest terms, the recent terrorist attack on Indian security forces on 14th February in Pulwama in Jammu and Kashmir.

They expressed satisfaction at the progress made in diverse fields including trade, energy, security and cultural spheres. The Crown Prince conveyed his appreciation for the Indian model of the ethos of inclusiveness, pluralism and tolerance.

They expressed a desire to grow bilateral trade in the energy sector, acknowledging Saudi Arabia as the world’s most reliable supplier of oil & gas and the key supplier to India.

The Crown Prince reiterated the Kingdom’s commitment to meet India’s growing needs for crude oil and petroleum products and substitute for any shortages that may arise as a result of any disruptions from other sources.

The two sides agreed to hold the inaugural joint naval exercises at the earliest and agreed to further expand bilateral exercises in other domains.

Both sides agreed on the need for creation of conditions necessary for the resumption of the comprehensive dialogue between India and Pakistan.

The Prime Minister and the Crown Prince reiterated that they would continue the ongoing cooperation on maritime security, law enforcement, anti-money laundering, drug trafficking, human trafficking, illegal migration, and other transnational organized crimes.