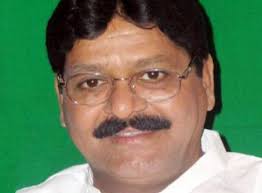 Sarve Satyanarayana suspended from party for revolting against TPCC leaders

Hyderabad, Jan.6 (PMI): TPCC has suspended from the party senior Congress leader and former Union minister Sarve Satyanarayana for making derogatory remarks against AICC leader in charge of Telangana party affairs RC Kuntia and TPCC chief N. Uttam Kumar Reddy during a review meeting held here to find out the reasons for the defeat of party candidates belonging to Malkajgiri Lok Sabha seat. He also took part in the meeting as he had contested Assembly elections from Secunderabad Cantonment seat, which is part of the Malkajgiri Lok Sabha seat and lost.

Speaking on the occasion, Surve alleged that both RC Kuntia and Uttam Kumar Reddy were totally responsible for his and other party candidates’ defeat. He also warned that he would lodge a complaint against both of them with the party high command. He also wondered as to how those who were responsible for the defeat of the party candidates could hold the review meeting. The series of allegations made by Sarve shocked the leaders like B. Kishan and made them reprimand the former Union minister. This made Sarve more aggressive. Satyanarayana said he would make public the other reasons for the unceremonious defeat of the party on Monday and left the conference room in a huff.