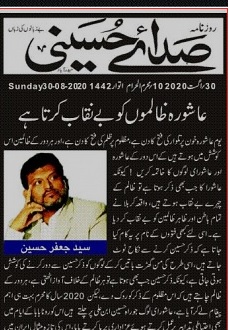 Hyderabad Sep 1 (PMI): An article written by Syed Jaffar Hussain Editor Sada-e-Hussaini was published on 10th Muharram 1442 corresponding to 30th August 2020 in Sada-e-Hussaini daily News Paper with a headline “AASHOORA ZALIMOON KO BE NAQAB KARTA HAI” in which Mr Jaffar Hussain said Yaum-e-Ashoora khoon per talwar Ki Fatah Ka din Hai and Mazloom per Zulm  Ki Fatah Ka din Hai. This has hurt the sentiments of Shia Muslims but none of the Olama or shia personalities raised their voice on this as they did in the past when something similar was published in any newspapers.

But now a days Azadar and Olama are busy in propagating matter which some people are trying to ignite disturbance in the community but they don’t bother about what was written by Jaffar Hussain in respect of Khoon-e-Imam Hussaina.s during Battle of Karbala on the day of Aashoora.

Even after making such a big mistake Mr. Jaffar Hussain did not apologised nor was admission of guilt published about the irrelevant sentence for Battle of Karbala nor clarified in his today’s Published Newspaper while he is very active in criticizing other people whoever says something regarding Shia community affairs or issues. He had immediately reacted on Commissioner of Police Sri Anjani Kumar’s tweet requesting with azadar and matamdar not to gather on roads on 10th Muharram. Mr Jaffar Hussain immediate attacked CP Hyderabad and said Commissioner of Police issuied “Fatwa” but he did not bother to accept his Mistake when he had made such a blunder and apologised for it in his newspaper published today nor uploaded any apology video in Sada-e-Hussaini TV or Safir News.

The Azadar-e-Imam Hussaina.s knows very well that he followed Supreme leader of Iran Khamenie, who is totally against Khooni Matam and it is ban in Iran. It has been noted a lot of times that along with his group members he had tried to convince people not to perform Khooni Matam on Ashoora and Arbayeen but to donate blood on those days. May be that is why his wordings were “Yaum-e-Ashoora khoon per talwar Ki Fatah Ka din Hai” and “Mazloom per Zulm Ki Fatah Ka din Hai” and he did not apology on his wording. (Press Media of India)